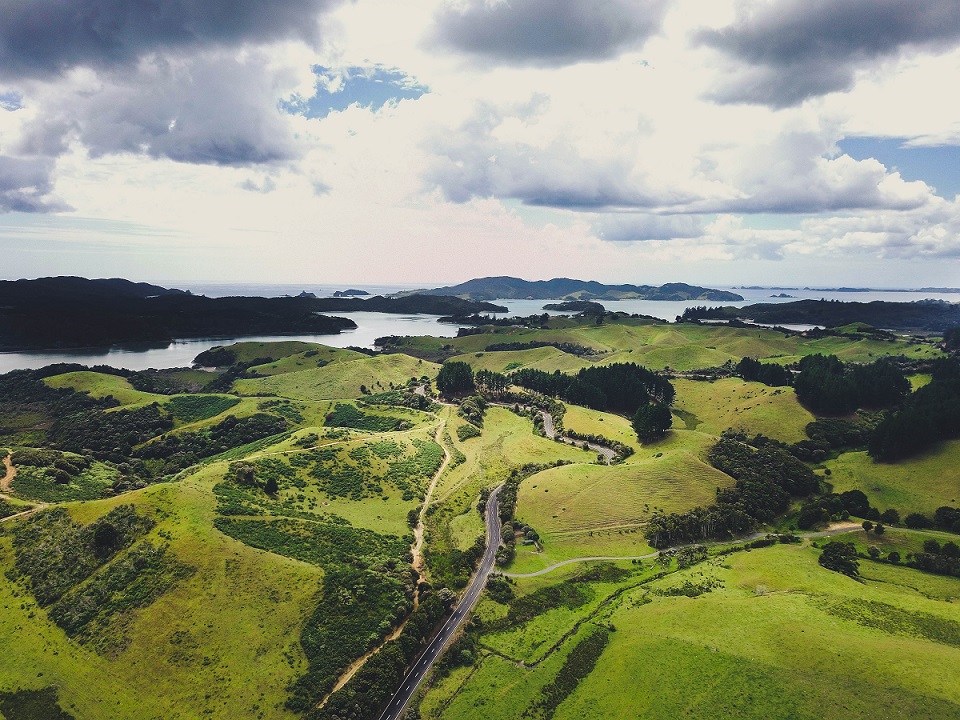 After traveling from beach to beach, from campsite to campsite we have decided it was about time to settle in one place at least for a few nights and that is how we came across The Farm. Algirdas, in fact, had already spotted it before on Campermate app and since it was nearby it seemed as the perfect peaceful place to chill. And just so happens due to this chilling or in fact working and some misadventures we didn’t really take any pictures back there, so this will be more of the text post but plenty of pictures coming along with the next one.

The Farm is basically a 1000 acre working Dairy farm on the Whangaruru harbor just a short drive from Russel and The Bay of islands. They do have a bunch of cows and calves, 47 horses (at a time of our stay), chickens, tiny little piglets, a bunch of other farm animals as well as a bunch of Wwoofers and backpackers. They offer a variety of farm life attractions from cow milking, motorbike, and horseback riding to kayaking, hiking and helping out on a farm.

At the time of our stay, there were quite a few people staying/living at the farm. There was the family (I believe Mike, Helen, and Sheena). Mike was running the farm and in charge of motorbikes, while Helen was all about the horses. Then there were quite a few wwoofers (around 7, I think) but we only met a couple of them. There was Maurice – very friendly kiwi guy, the German girl, and guy that were taking care of backpackers, the Dutch girl taking care of horses and a bunch of others, who I’m not really sure were doing what but weren’t really into interacting with the backpackers and campers. Anyways, wwoofers mostly spend time in the kitchen and area designated for the family, while backpackers have separate facilities, so if you really want to experience the Farm’s community, you should go there to do some wwoofing.

There was also a 7-year-old boy, Alfred, who was very creative and constantly was pranking everyone and trying to persuade them to jump with him on a trampoline by crawling up and sitting on their shoulders like a little monkey. Speaking of pranking, he pranked Algirdas as well. He came to Al shouting for help, asking to carry a long branch to his room. Algirdas being a kind and decent person naturally helped this little boy carrying his branch. Little did Al know, that was not his room and as soon as Algirdas entered the room the kid locked him inside crashing the doors behind. Somehow Algirdas managed to open the door and get out. You should have seen the surprised Alfred’s face when he came back and found no one in the room. He went running around the house and all spooked and terrified looking for Al, shouting “Hey boy, where are you boy?”.  So, at the end joke was on him.

The mattress covers and how I learned to sew

The Farm seemed so lovely and peaceful that we agreed to spend there a couple of nights and take it as an opportunity to use the time sewing our new mattress covers. Yeah, I know what you are thinking, I, myself, can’t yet believe that I have been sewing something (after all this is pretty much the first thing I have ever sew). I don’t really remember, if I have already mentioned it before, but when we bought the van it had a really crappy foam mattress – parts were simply not fitting, and the sewing was absolutely ugly (since we have already gotten rid of it, I don’t think we took any pictures, but it was really really bad). So, during the visit to Whangarei, we bought a new mattress at Para Rubber, where it was custom cut into 4 parts to fit our bed measurements. However, the problem now was it was just a foam mattress without any covers, which meant we had to buy the fabric and sew them ourselves. After quite some time searching we found the perfect fabric (for a reasonable price) at Spotlight. It was the Star Wars fabric, though, we had to suffer the silent hate of the lady who had to cut the fabric into pieces for us.

So here I was at the table at the Farm with a mattress part and a piece of fabric trying to figure out how, where and once again how to do it. For what it’s worth, besides sewing a coat button, I have never sewed in my life… like ever (imagine the surprise in my mom’s voice when I told her about the bed covers). Or maybe I’m lying. Now that I think about it, I have actually done it once before when I was helping a friend with wedding preparations by sewing ‘skirts’ for the dinner tables. I’m sure I was the worst of all the helpers and just really hope no one had to redo my work there but I was pretty useless. Getting back to the bed covers. As I was staring at the mattress and the fabric and still nothing had happened in 20 minutes, Maurice came by and asked if I needed any help with what I was doing. He joked around a bit and said that in fact Mike’s sister was living at the Farm and she was, in fact, a tailor. Imagine the surprise and happiness shining on my face. That went away as soon as she said she is extremely busy and had to sew clothes for the next day’s market, so I was back to square one – sitting by the table with a needle and a thread. So, it took me only 10 hours non-stop sewing and I was finally done… with one bloody part out of 4 (you can find my sewing story continued here).

Fellow travelers at The Farm

After an entire day spent sewing, I didn’t want to see a needle in my life again. At least we got talking to a nice German newlywed couple – Isabel and Jurij, who were almost at the end of their 2 months trip through NZ. We have also met an incredible Dutch family with 4 kids that day. All of their children are under 10 years old and all are fluent in English. In fact, kids speak English among themselves as their inside language. Apparently, parents used to do some work related to developing countries projects, therefore have lived quite a lot abroad. Together with their children they have lived for a few years in Russia, followed by few years in Istanbul, Turkey. Now, before returning back to the Netherlands, they have decided to homeschool and travel with their kids, as once they are in Dutch school system it wouldn’t be that easy taking kids from school to travel. So, they have been traveling around New Zealand and have South East Asia planned to do next. I can’t even find words to describe how amazing these kids were. They were all so smart, so curious, conversing with adults they just met about their travels, animals, dreams of becoming safari rangers and event talking politics (no kidding). In a way, it reminded me of a movie ‘Captain Fantastic’ and made me think that this is how one day I would like to raise my kids.

The next day I have decided to enjoy the farm a bit before sitting down to sew once again. That’s why I went for a horseback riding around the farm with the German couple and our guide – Dutch wwoofer girl (unfortunately I can’t remember her name anymore). So, I got to ride this tall, brown beauty named Philip. Even though Philip was calm, lovely and just adorable nonetheless, this ride ended with a terrible pain in my ass (both – literally and figuratively speaking). Not sure why, but we were riding without saddles (maybe because it was almost first time for all of us riding). I actually liked it, it made me feel closer to the horse but also less stable. Mostly we were just slowly walking but at some point, Philip just started running down the hill, I got spooked, lost control and fell off of him hitting my lower back and pelvic bone right on a broken off tree stem. For a second my eyes went completely dark and I thought I would never stand up again. To my own surprise not only did I manage to get up but also to finish the trek riding on the horse back to the stables. Unfortunately, I did not manage to get out of the bed for the next couple of days as any tiniest movement was a terribly wave of pain pretty much everywhere (poor Algirdas dealing with me like that).

Since I’m slightly a hypochondriac, after googling I’ve kept changing my mind for the next days whether I should or should not go to the doctors. Though, I was pretty sure I had broken my pelvis and had internal bleeding. Luckily, this was all just in my head. In the end, I never went to the doctors, though, to anyone else for a peace of mind would highly recommend not to delay and go straight to the hospital. Even after a week, when I was writing this I was still feeling the pain but was able to walk freely at last. 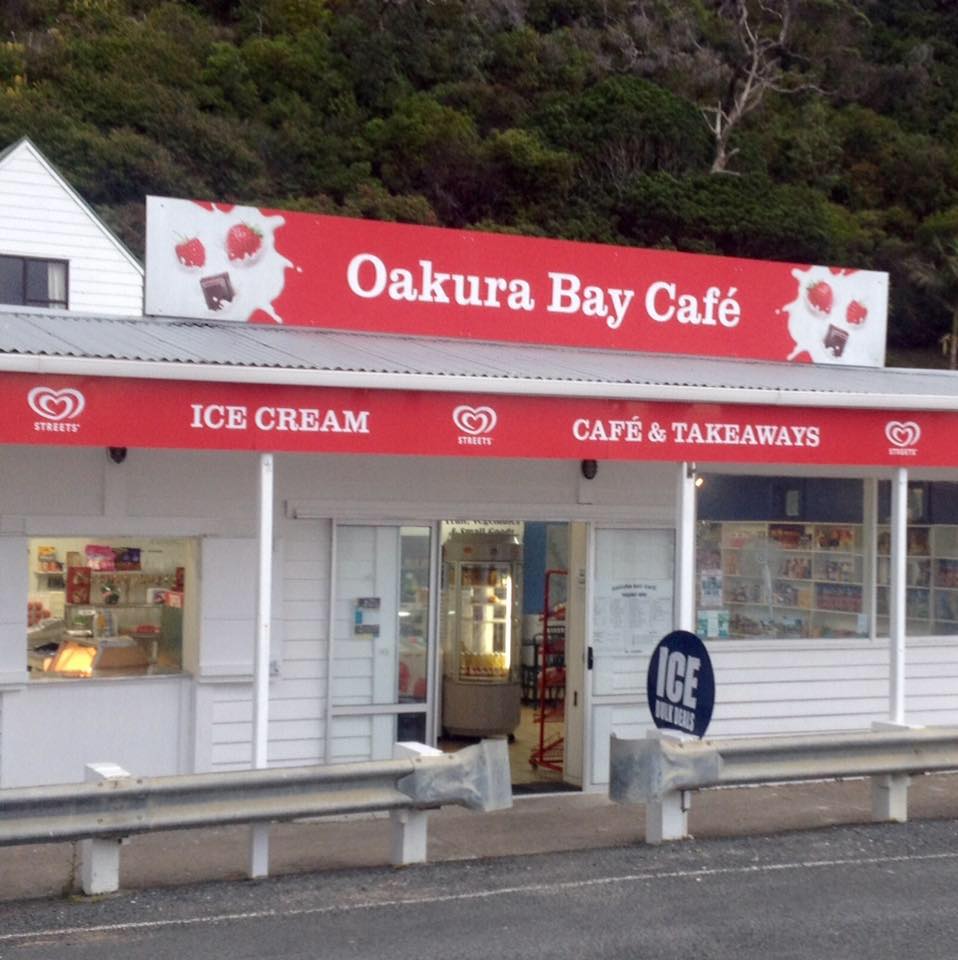 Since after the fall I was no good for any other activities, we decided it was about time to leave the farm and look for a free campsite, since each day at the farm cost us 30 NZD. As we have left the farm we had a couple of campsites in mind but also decided to stop at Oakura for some local Fish & Chips. Now ever since we came to NZ we have been on a hunt for the best Fish & Chips (it is one of the favorite Al’s dishes) and we had heard from a few people at the farm that Oakura Bay Takeaways made really good ones. Quite frankly, now after nearly 3 months of tasting Fish & Chips in different places, we still believe these were the best ones and actually the cheapest ones we had. I will make sure to later write a post about all the Fish & Chips places that we have visited. Anyways, if ever nearby The Bay of Island/Russel, make sure to pay a visit to Oakura for a scoop of chips with some fresh, battered fish. Oh, and their portions are huge!

Comming next – Giant Sand Dunes, Cape Reinga and everything that Northland is about! 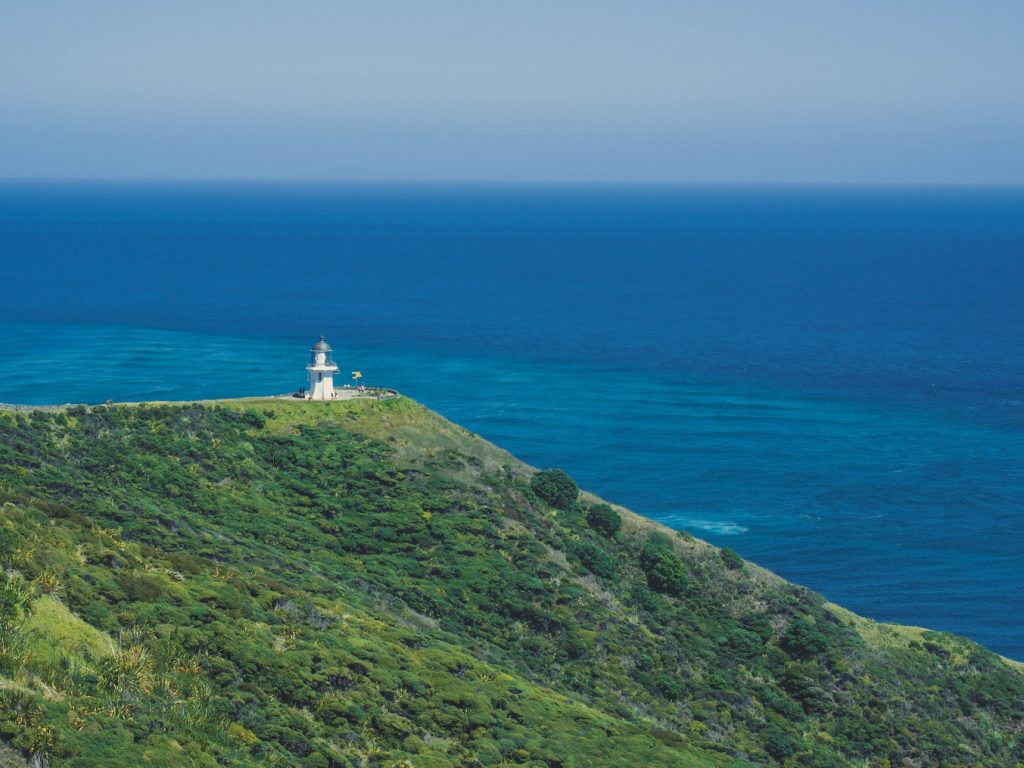 Cape Reinga lighthouse in the distance!