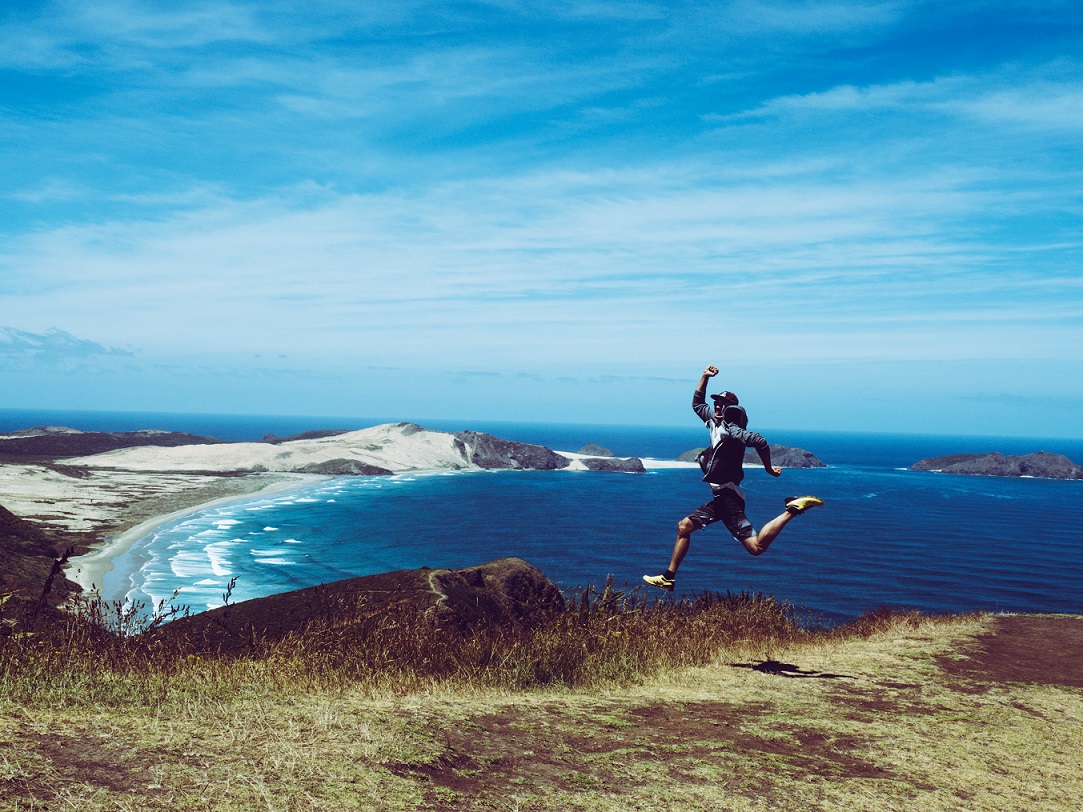 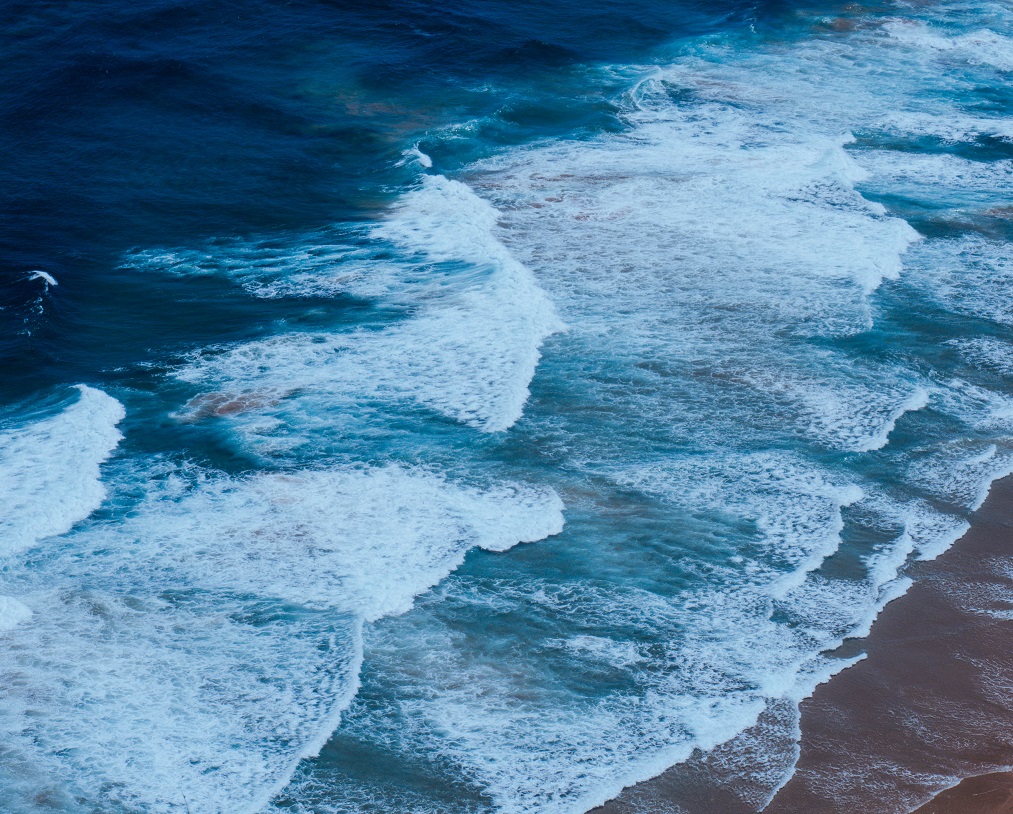 After the farm, we decided it was a time to further explore the Northland. First, we have found a DOC campsite at a Kauri forest near to The Bay of Islands – Puketi Recreation Area Campsite, where we spent the night. Even though there was a Kauri forest walk next to the campsite, due to heavy rains and me barely moving all in pain we did not manage it. Now that I think, at the time we didn’t realize yet what was the fascination with Kauri trees as the ones we had seen were rather small and not so different from the rest of the trees around. If only we had known back then that Kauris are these impressive huge trees (much like redwood sequoias), which pretty much can only be found in the Northland, we would have definitely gone to wander around them no matter what. However, this time visiting Northland we somehow managed to miss these beautiful centuries-old giants. But for sure they will be our number one destination whenever next time headed there. 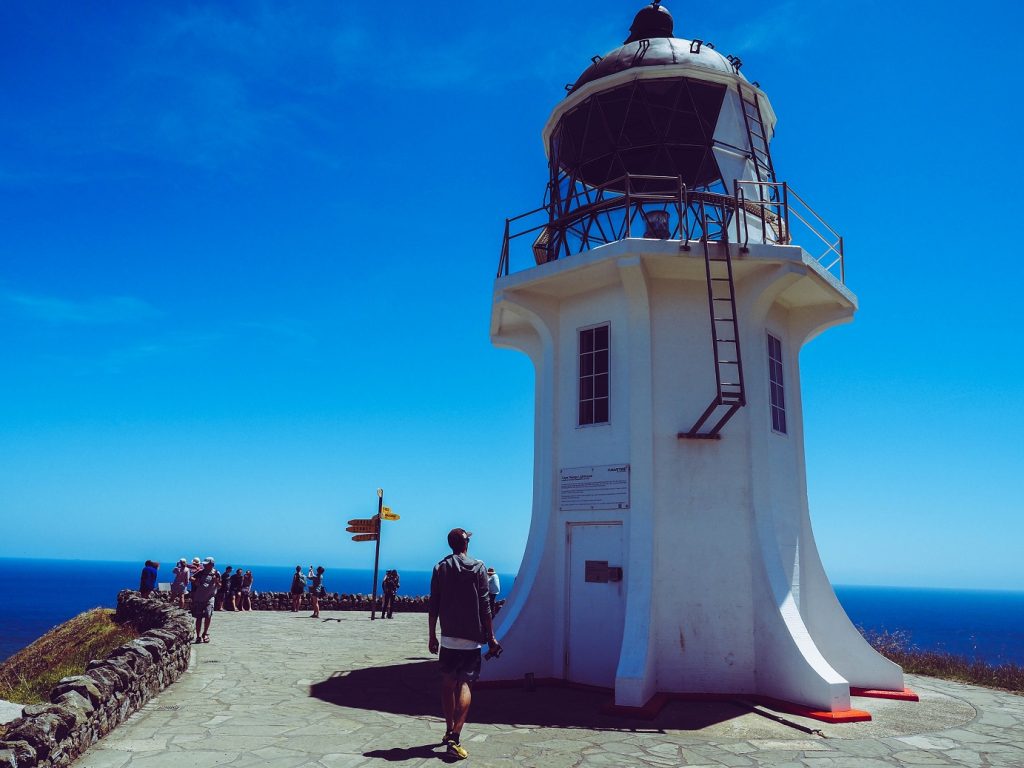 As I mentioned, this time it was raining quite a lot and we decided to pass on The Bay of Islands and move ahead for the furthest point to the North, the jewel of Northland – Cape Reinga.

Now, even though, Cape Reinga if for sure a very touristy place (and we tend to avoid those, preferring more obscure locations), it is well worth the ride and is one of the most beautiful places we have seen so far in New Zealand (that is still true even after 3 months on the road). 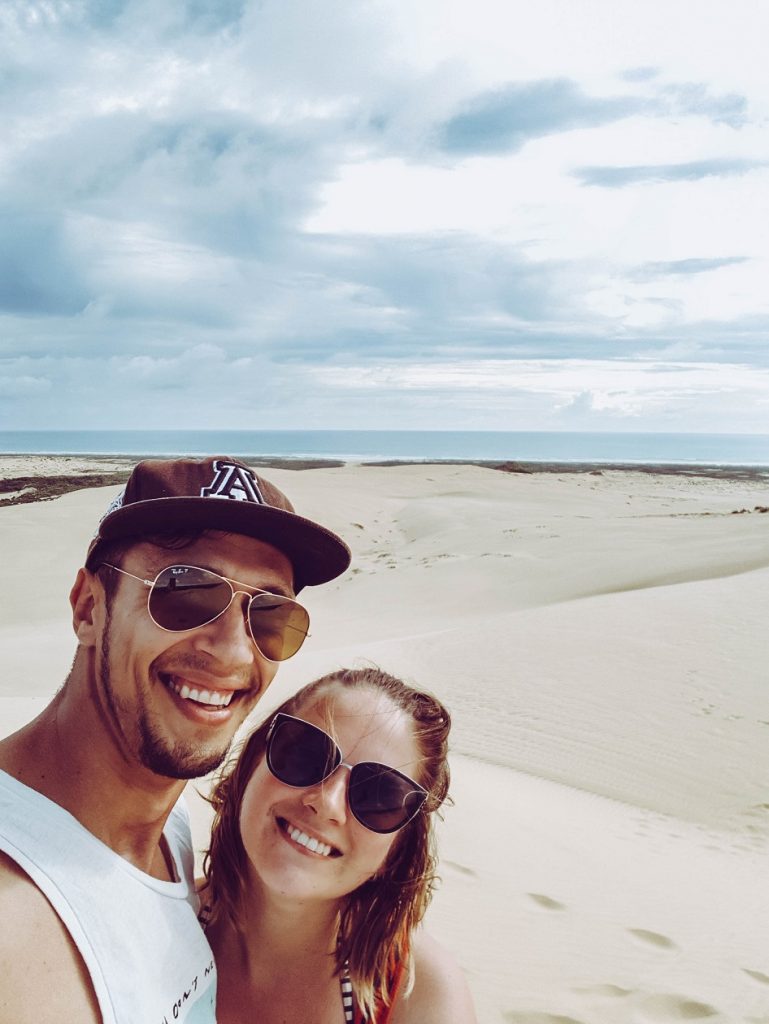 On top of the Giant Sand Dunes

That evening we have arrived at the Giant Sand Dunes (approximately 20km before the Cape Reinga) leading to the Tasman sea. Being there and being in so much pain I couldn’t let it keep me from enjoying the place. So, I gathered all the strength I had in me and pushing through the pain managed to get on top of the highest dune from where you can finally see the sea.

We were both excited and so ready for some drone shots, however, the phone or the software failed, and it simply didn’t work. Being approximately 40 km of reach from phone/internet reception, there was no possibility to check for solution or download app to other phones, so I had to try and comfort Algirdas in his disappointment (which was leading us the following day as well, as this was the perfect setting for flying a drone and ours was simply not working). So, sorry, there will be no drone shots from Giant Sand Dunes, or Cape Reinga, or the 90 miles beach, but I can assure you that these are spectacular locations worth a visit and if you have a drone, make sure it is working and take it along. 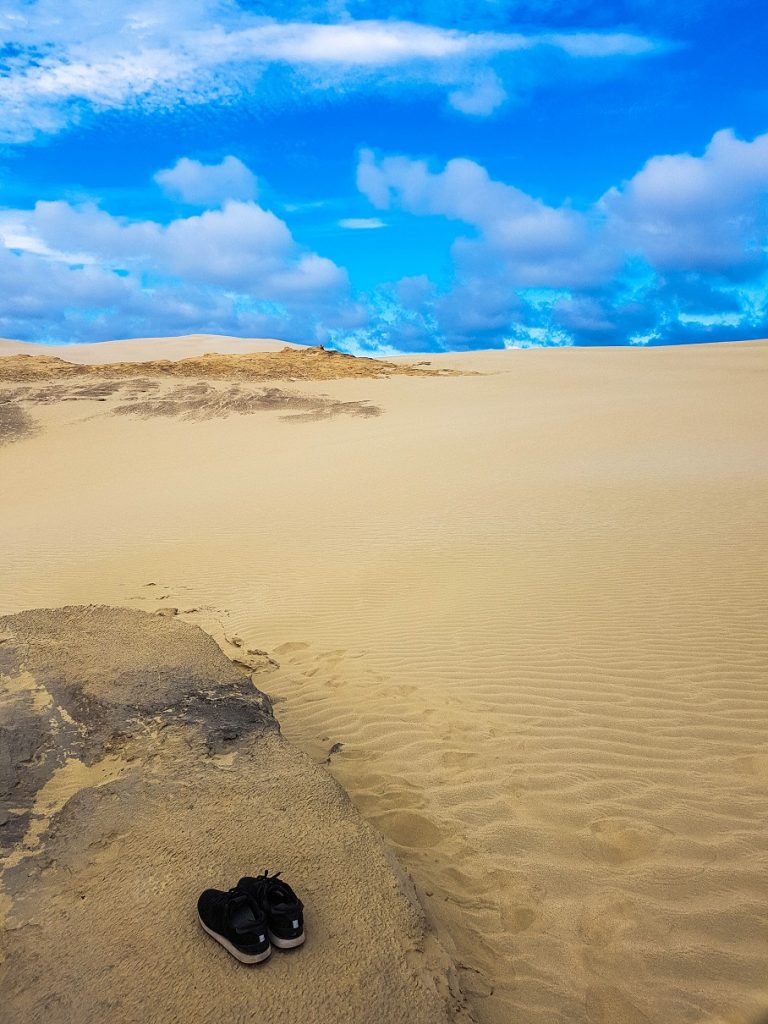 Barefoot is the way to go

It is an amazing feeling you get when climbing this massive sand dune, feeling like in a desert, since after getting to the top you see nothing more but a bunch of other even bigger dunes. Now, this is nothing new to those who have been to a desert, except if you persistent till the end and manage to get on top of the highest one, you will be blessed with the sight of the sun setting in Tasman sea (if you get there in the evening).

Leaving the dunes behind we went looking for our campsite on Spirits’ Bay where we settled for the night. If you ever plan on visiting Cape Reinga, I highly suggest choosing this lovely site, which requires quite a bit (16km) of bumpy gravel road ride over the one located next to the Cape Reinga site. First of all, Spirits’ Bay is really beautiful with little rabbits, horses and birds, it is way less crowded and way much cleaner (fewer people, more facilities and it even has some cold showers).

Cape Reinga – where the Tasman Sea meets the Pacific Ocean 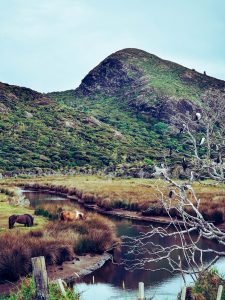 The following morning, we rushed out hoping to get to Cape Reinga before the noon – before the crowds. Due to the hurry though, I have forgotten my lovely ‘Avocuddle’ (avocado who cuddles you) pajamas hanging on a campsite’s shower door. It was rather new, so I hope whoever found it, after washing, got to enjoy it as much as I did. I loved it so much that as soon as we got to The Warehouse I got a new one exactly the same for 18 NZD!

Cape Reinga was stunning nonetheless! As I have already mentioned, wherever we go, we are rather keen on trying to avoid the crowds and wish to experience nature places alone in their beauty. So naturally, the hordes of tourists around you and in every picture you take may get a bit annoying. 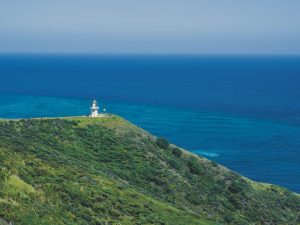 Cape Reinga lighthouse in the distance!

But how can I complain when I am one of those tourists for someone else looking for the same thing? In such cases, you have to be creative and yourself seek for places off the beaten track. In Cape Reinga, we did manage to find a little track going out of the touristy path to the lighthouse, which we did not hesitate in taking. 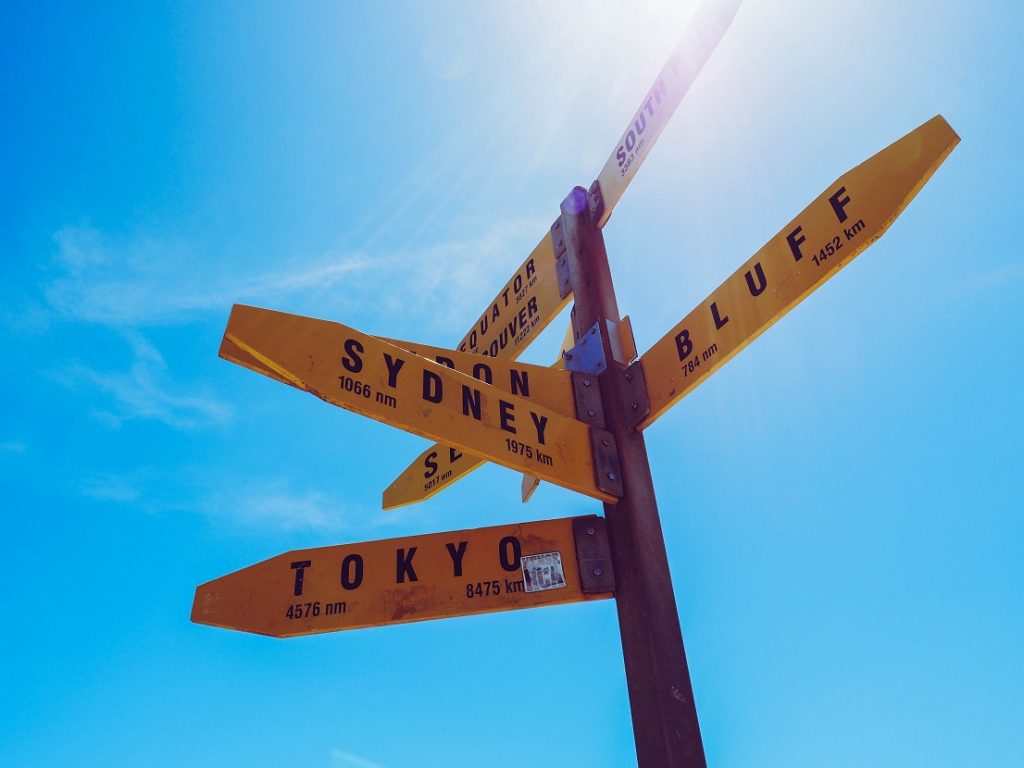 It leads to an amazing view of the waves crashing against the rocks, lovely hills, cliffs all around and stunning sight of the lighthouse at a far distance. This place was only ours and we took our time soaking in the beauty all around. If you ever there, I highly recommend taking this small detour off the track, just be careful and do not walk too close to the cliffs – safety first after all! 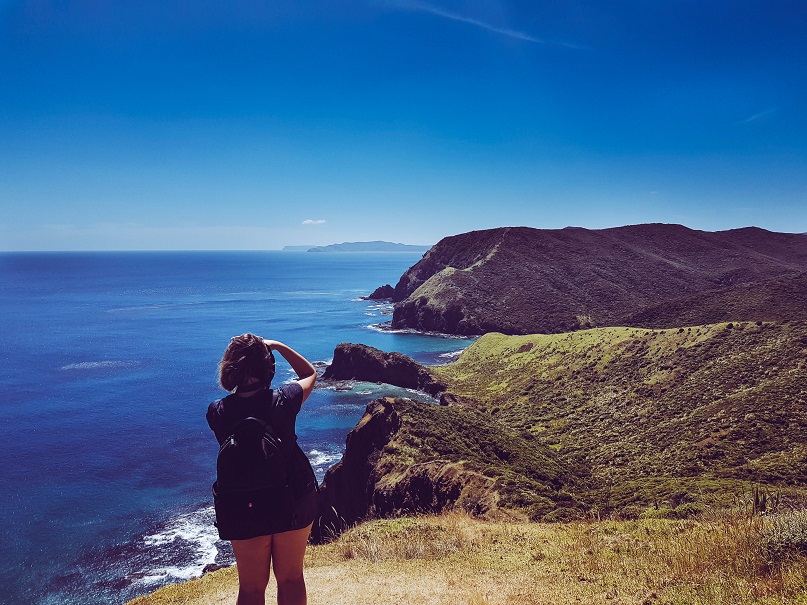 No matter how much I try, I still can’t capture the true beauty of it

By the way, when going to Cape Reinga keep in mind there is absolutely no phone reception for the past 40-50 km up to Cape Reinga. Well, at least for Spark NZ. In general, phone reception in NZ is terrible, if even a little bit further from the cities. Why do I care? Well, on the way to Cape Reinga we started thinking of what we should do for the New Years and both of us agreed it would be amazing to find some kind of a rave party/festival. Unfortunately, everything we found was either very mainstream, either sold out or super expensive or simply on the other side of the country from where we had to be. Imagine our surprise when by accident I stumbled upon exactly what we needed – Twisted Frequency festival at the Golden Bay (North of the South Island). That was a perfect spot for us, where we would manage to get on 30th of January and that we could get to Queenstown by the 15th of January to meet our friends. We were psyched with the discovery and were buying tickets while on the way to Cape Reinga, however, just as I was paying we lost the reception and for an entire time in the region we did not know if we managed to get our tickets or not. Lucky for us, we did, and we were on our way heading south already.

By the way, if looking for some similar events, rave festivals, etc., I found the best way is to look on Cosmic Ticketing and The Ticket Fairy websites. 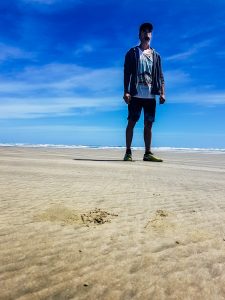 Just before the ride on a beach

After Cape Reinga, we made a short stop at 90-mile beach where we took a chance driving ~10km on the beach (so fun – feels like on a highway actually) and headed back towards Auckland leaving the Northland behind. Oh, we also made a short stop at Whangarei, at a Spotlight for buying a hand-held sewing machine, which was supposed to help me with the covers, as if you read my previous posts, there were 3 more left). 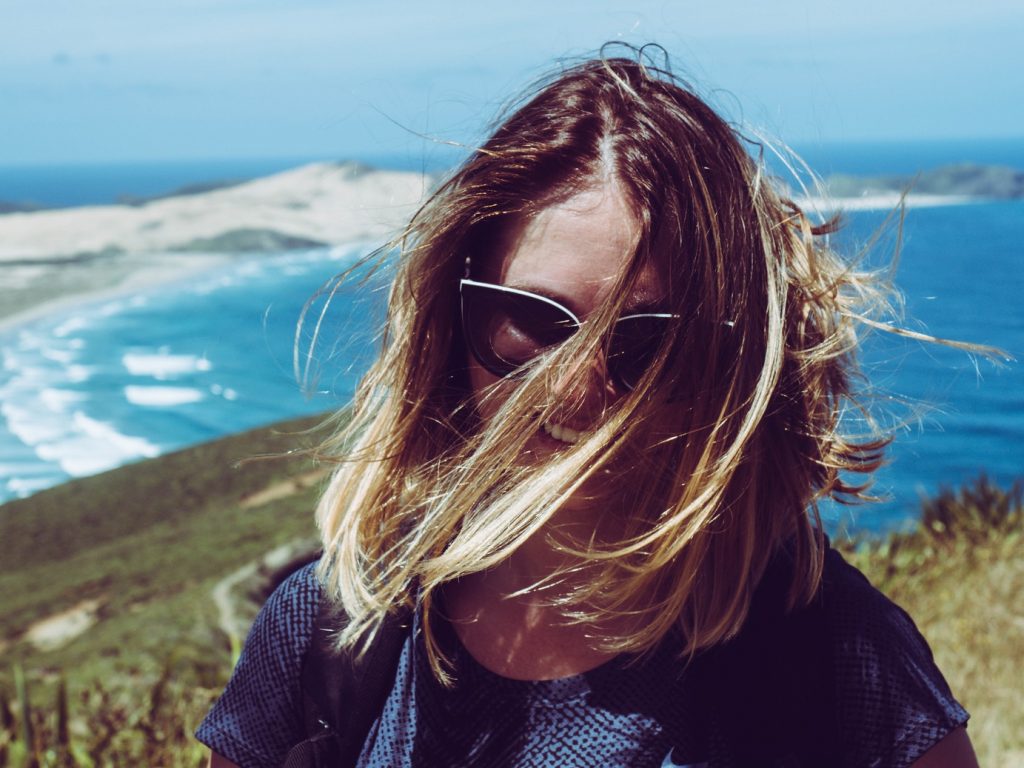 Can’t help but enjoy the wind in my hair

By this time, we had already planned our New Years but had no idea yet where we gonna spend Christmas or the next upcoming days. After all of this, we have decided that it was about time to treat ourselves to a decent bed and booked ourselves a cabin at a holiday park nearby to Matamata (Hobbiton). We were hoping this would be a perfect setting for us to relax, finish up those 3 remaining mattress covers and enjoy some ‘luxury’. Little did we know what we had gotten ourselves into, but you’ll have to read about it in the upcoming post! 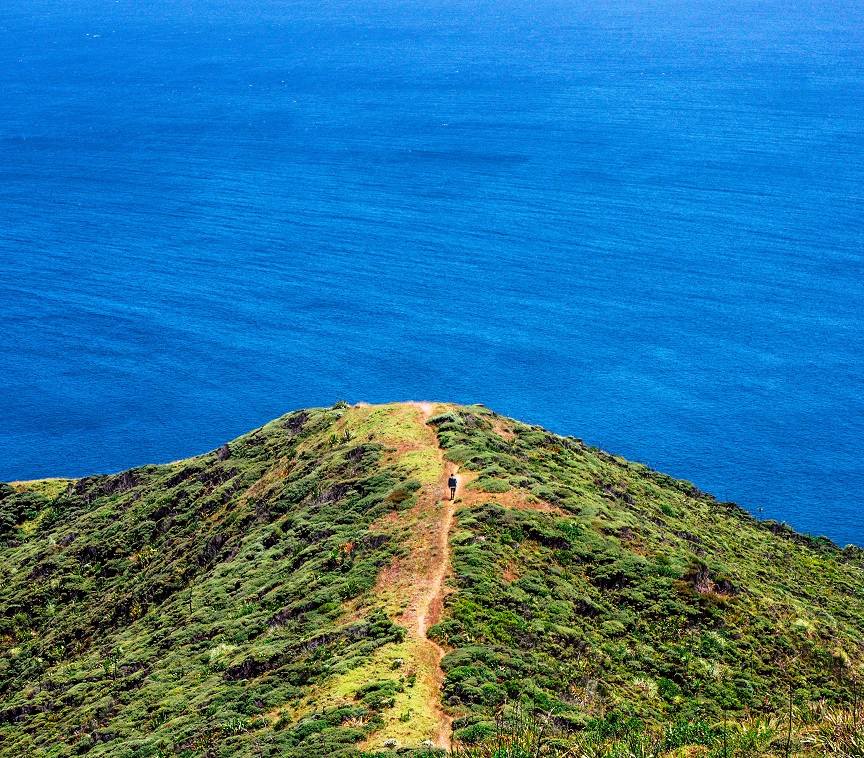