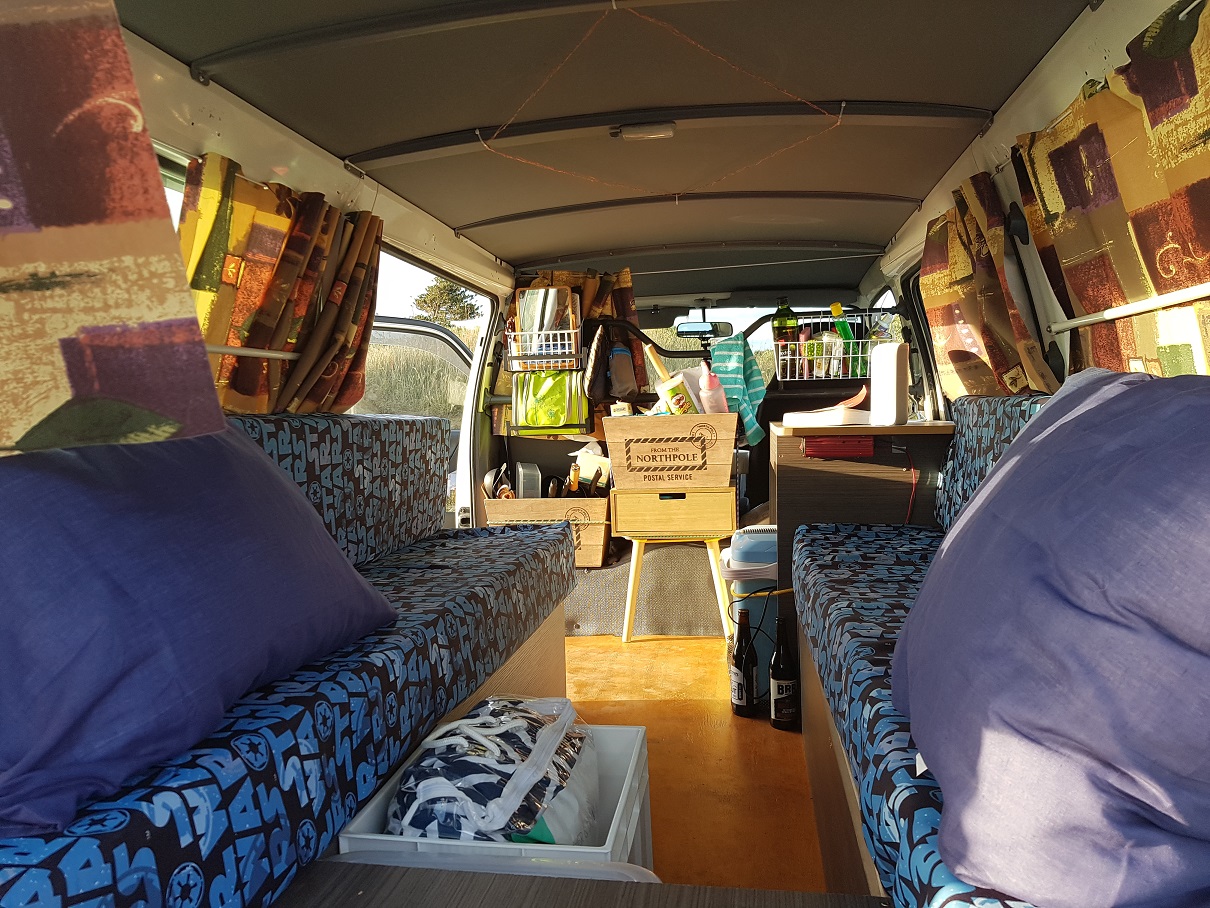 Right before Christmas after exploring Northland, we had decided to treat ourselves with a proper stay in a cabin – with a normal bed, kitchen and even hot pools available in the holiday park for the same price. We looked around and chose what seemed a great deal and it was a holiday park in Matamata, so we hoped to swing by the Hobbiton as well. We had no idea what kind of ‘luxury’ experience we were about to face as this plan of ours went as wrong as it could have gone. Needless to say, I have already sworn by never staying at holiday park cabins ever again. So read on, to try and experience our trailer park life adventure.

First disappointment was to learn that you can’t just show up at Hobbiton and go for a walk as you must book a tour and apparently being the holiday season and all, all the tours were sold out a long time ago (only very pricey reseller options could have been found online). That wasn’t so bad as our main plan was actually just to relax and use this time for sewing the mattress covers, so we agreed to visit Hobbiton once we get back from the South Island.

When we arrived at the holiday park, the first impression was actually kind of nice, well, at least besides a few weird neighbors, who reminded a couple of guys from Canadian tv show ‘Trailer Park Boys’. They were drinking beers and smoking cigarettes on the porch directly under a ‘No smoking’ sign. But we didn’t think anything bad about it at the time. I guess we should have paid more attention to the receptionists warning as well. When we checked-in, she warned us in case of any trouble at the night not to deal with any troublemakers ourselves and to call the night manager in case of any disturbances. We thought that to be a bit odd as we didn’t really expect any disturbances based on previous camping experiences. I guess we missed to account for the fact it was Christmas holiday season, and this was one of the cheapest holiday park cabins anywhere around, so I guess it wasn’t only us deciding to treat ourselves to Christmas holiday cabin stay but locals who can’t really afford luxuries as well. Anyway, I’m getting ahead of myself.

We chose to ignore the guys on the porch as they weren’t our direct neighbors and settled in. One thing I didn’t expect was for the cabins to be a block house. I imagined a cabin meant a separate little cabin house, but it turned out to be a long block connected all together with cabins – 10 rooms one next to the other. Still, that was alright as we had our own kitchen and a shower separate from the rest of the park (just for cabins).

The huge and rude family vacation

Not having had a shower in a couple of days and having opened a bottle of beer, I actually joked around that we fit right in and that in a way I felt like a character from a movie living in a trailer park. Well, I guess the joke was on me as soon enough it turned reality. First, it was just little innocent disturbances. As I sat on a bed trying to convince myself to start sewing, we’ve gotten annoyed by the direct neighbors on the left, who pretty much had all their relatives (like 20 people) gathered on the porch blocking our door, stealing our chairs and making so much noise (whistling, laughing, shouting, etc.). Anyway, it seemed like it was a huge family on vacation, who took one ‘fancier’ cabin with the kitchen (for grandparents) and other 3-4 cheaper cabins without kitchens, so of course, when the lunch, dinner or breakfast time came, everyone was gathered at the grandparents’ porch. Just the porch was so small the whole bunch of them didn’t fit there, so instead of moving somewhere they chose to be rude and block our doors making a mess everywhere. It’s funny we were so annoyed with them we didn’t realize we should have been happy with them as our neighbors as this was just the flowers compared to what was to come ahead.

The Trailer Park Guy a.k.a. the washing machine

Next morning, we were awoken by one of the annoying kids whistling by our window and constantly peaking inside our room. On the other hand, the bed was so uncomfortable I can’t even say if we were awoken by him as I’m not sure if we even slept at all. The day start was followed by another disappointment – finding out we had bought a defective hand-held sewing machine, which didn’t work as advertised. Well, I still think it would have been a perfect device only if had gotten ourselves a good one (at least tested before driving 500km away from the shot). Algirdas did his best trying to fix the machine and make it work properly but eventually it just broke to pieces. So we ended up with putting Al’s engineering skills (and obsession with precision) to work as he was measuring and cutting the fabric, while I was sewing by the lines he had drawn for me. I have to say, the second, third and forth mattress covers went faster and better (I’m pretty sure only because of Algirdas involvement in the process), though the hardest part is still in the future – finishing up and sewing the ends as for now we have just the sleeves (Update: after 3 months, well, I did manage to finish the end of one of them and still have 3 ends to close… well, I know, I’m ashamed but those ends are real pain in the ass). 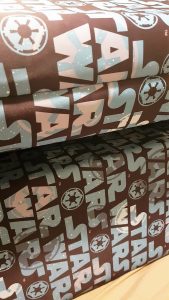 Anyway, as I was sewing we suddenly heard and felt the whole house bumping. Algirdas though it might have been the washing machine or something but, as soon as I walked outside on the porch, by the screams and moans we realized it was not a washing machine but a trailer park guy from yesterday banging a toothless methhead prostitute he had brought over (we saw her later wandering all around our door, so that’s where the description comes from). At that time, we were about ready to pack up our stuff and leave the place behind us no matter the money was paid for another 2 nights. However, by that time we had only finished the second cover and had two more to go and without finishing them we didn’t have a bed to sleep on.

So, we decided to suck it up and just to stay in the room and sew and try to avoid anyone and everyone around. Oh, I guess there’s no need to mention we didn’t go for the complimentary hot pools in the park and didn’t use the bathrooms or the showers dedicated to the cabins anymore (the ones for campers were way much cleaner and in way more decent condition). Can you believe this was still not the worst part?

In few hours the banging finally stopped. Around that time we got our new direct neighbors on the right – a family of 5 (though the woman was pregnant and due probably in few weeks, so you can call it a family of 5 and a half). It was a Polynesian family with three kids, all under 3 years old, the youngest still being just a baby. We saw them arriving – the husband quite a fat guy driving shirtless, got out of the car, kicked it and went straight for the porch where he opened a beer and sat down watching while his pregnant woman carried all the heavy looking bags and kids from the car. Meanwhile, the two older kids were running all around the porch (including running into our room completely naked). Just as the women left with the baby to the hot pool, the man started inquiring the prostitute how much she cost as she had just exited the trailer guy’s room and was now walking all around the porch waiting for her taxi.

It truly is hard to describe what a ‘loving’ family this was (you should have been there to experience the true emotion of it all): they were constantly shouting and calling out names and just to mention a few ‘b***h’, ‘get the f**k out, you useless piece of sh*t’, ‘f**k off’, ‘shut up you c**t’, etc. By the way, the majority of this was addressed not between the adults, but parents calling out their little kids. Those poor kids were crying all night loudly, and instead of getting up and changing their nappies, parents kept shouting at them to shut up using all the names mentioned above and some even some worse. That’s what we lived with for next two days.

Can’t tell you enough how happy we were to finally finish those bed covers and get the hell out of there (if not for those covers, we would have left the same day we arrived). Being there just for those three days we ourselves realized we were getting angry, annoyed and started whining. Imagine what it does to a person growing up in such environment?

On to the Christmas

Leaving the place, we felt so relieved and getting rid of the old crappy mattress in Hamilton made it feel like getting rid of all that negativity which generated over past few days. As the positive mood was back on, we grabbed a couple of books from Hamilton’s Refuse Transfer Station (the place where people leave their old stuff and can buy some second had things) and decided to head towards New Plymouth for Christmas at Mt. Taranki (Mt. Egmont).

Speaking of those books, I’ve decided it was time to seriously get back into reading this year and decided to take up a challenge of 50 books in a year. Actually, now I’m about to finish one of the books I bought back then and can definitely recommend it to anyone curious about race and ethnicity issues, Barack Obama’s self-reflection on his upbringing and events/people/circumstances that led him to who he has become – Barack Obama ‘Dreams from my father’.

Anyway, we reached Mt. Taranaki’s carpark same night (23rd December) and spent it admiring the beauty of the clear night sky above the mountain peak. It was supposed to be a beautiful Christmas Eve tomorrow at Mt. Taranki, but I guess by this time we should have learned that things aren’t necessarily always going as planned. Let’s talk about Christmas next time and for now, we Still Got It!