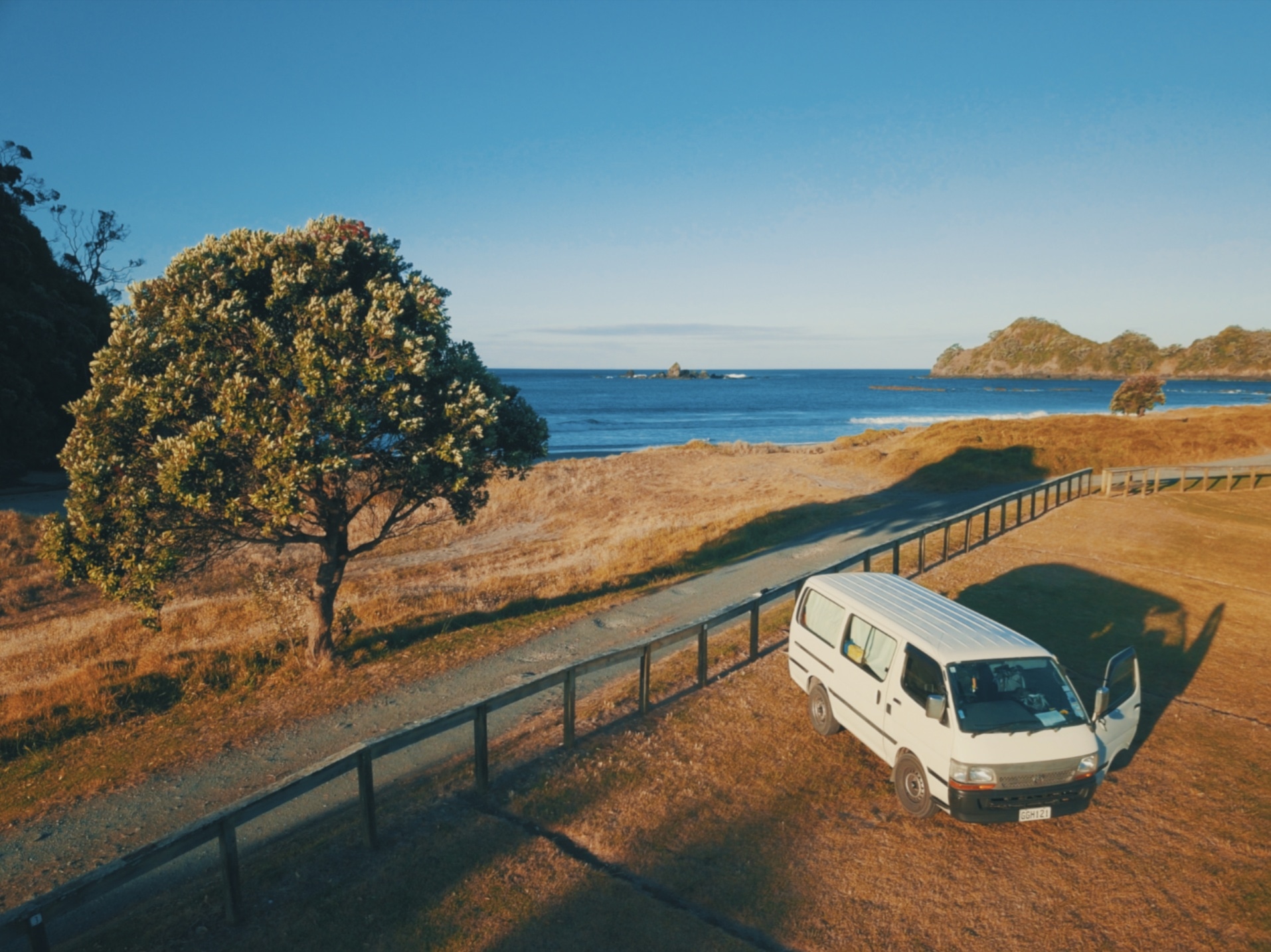 Life is a beach in New Zealand 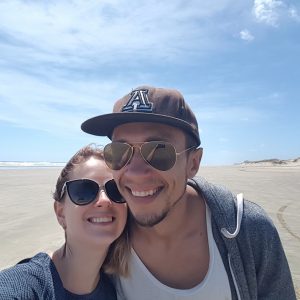 Life is a beach. Or at least it has been our life for the past week. Starting with few nights in Muriwai, then Whatipu and last night in Uretiti bay, where we got to witness sunrise this morning. Now once again we’re enjoying a peaceful evening at Otamure Bay. These past few days have been quite eventful, so let me pick up where we left off. 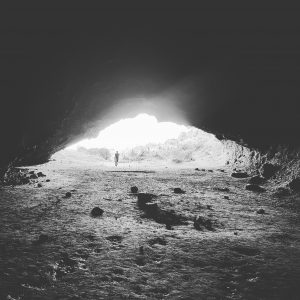 After floor staining and other improvements were finally completed, on Sunday afternoon we’ve gone on an adventure exploring the nearby Whatipu cave. Funny story is there used to be a dance hall setup in one of the caves (many decades ago), which now has been covered by 5 meters of sand (more or less) – what a force of nature fighting human interference. Quite frankly, I keep being pleasantly surprised by the kiwis each day – how invested they are in preserving the beauty and wilderness of their land – quite a few things the rest of the world could learn from them for sure. Anyways, cave exploration was quite short and a nice introduction into what was to come ahead. 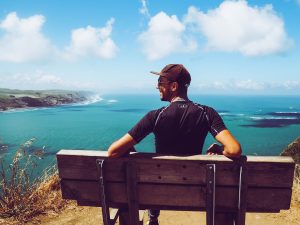 Well, we really liked this bench

The next day (Monday) we had planned a morning hike on Omananatui and Kura tracks and then to head back to Auckland to pick up NZMCA related stuff. Little did we know the track took us longer than expected (well, took me, as Algirdas could have done it in half of the time if not even less). It was mostly because I am so out of shape and had to stop for a break every 50 meters. So, at the end of the day we did not manage to get to NZMCA in time but who cares? Not that we have any time limit, any obligations or any plans at all (well okay, we do – 1 year, meeting friends in Queenstown on January 14th but nothing to worry or overthink). 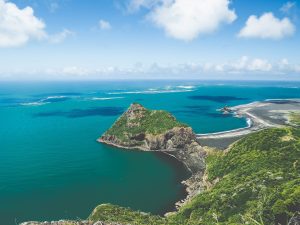 We live for the adventures

Coming back to the hike, despite the eye opening on how much more work I need to put into so to be ready for the multi-day Great Walks, the hike was a pure bliss. Of course, I was catching my breath all the time, was all red and sweaty and pushing through every step but the joy and excitement kept me going. Lemming’s bench panorama (probably the bench with the best view in the world or at least one of those for sure), mesmerizing kauri tree bush paths and crossing the refreshing stream back and forth – I was in paradise (especially knowing this is just the beginning). Not to mention great company along the way. 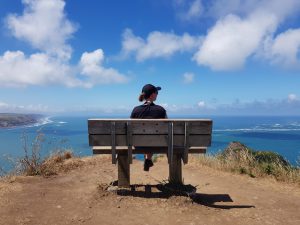 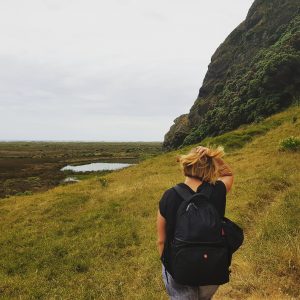 Catching wind in her hair

Well, of course, Algirdas is the best company ever, but we’ve also met these amazing Canadian sisters on the track, who actually were camping in this cute Nissan Vanette next to us but we just never got to talking in the campsite. Chatting with them along the hike not only made it easier but was a pleasure to actually finally be talking to other travelers. As I said before, Algirdas is the best company I could ask for (as I bet I am to him (well, better be)) but at some point, everyone wishes more people to talk to (do I sound desperate? Hahahaha). 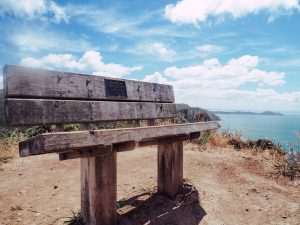 Anyhow, Sam and Jess were both super outgoing and had many travel stories to share. Oh, and by the way, they sort of are half Latvians. Even though not Lithuanians but still what a coincidence. Even more, their grandma’s name was Ruta. As fun as it has been, in the middle of the hike we had parted our ways as we were rushing back to Auckland and the girls were late for their next destination. As you already know we did not manage to get to NZMCA in time, so we stocked up, sold our old chilly bin (long story but we bought an electric cooler instead) and hit the road to check out Piha beach. 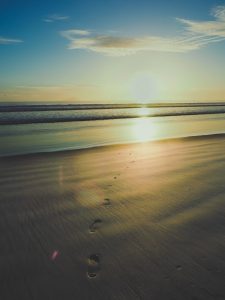 6 AM greeting the sunrise

This was the worst night so far but being the worst, it was still completely amazing. What I mean when I say the worst is the Great Mosquito War – survive or be eaten alive. Remember those bloodsuckers I was mentioning before? Well, it will be all about them.

Anyways, we did arrive at the campsite rather late as the sun was already setting. I immediately took this campsite as the bliss getting the privilege of enjoying a hot shower after the day’s hike we had. Later that night we tried to enjoy our dinner, though, the cooking was a bit complicated by the ducks terrorizing us for food (funny enough, being chicken). By the way, at the dinner table, we did realize we’ve never cooked so much and so often back at home as we do now. 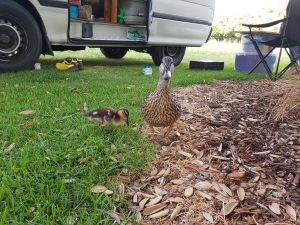 Under attack for food

After the dinner, we finished cleaning up already with the dark keeping our van doors open. That was the mistake we are never going to repeat again. Rule no. 1 of camping in New Zealand (or in most parts in the world) – as the sun sets, close the door, put on some baggy clothes and cover yourself with decent insect repellent preferably with deet (every part of exposed body) and only then attempt staying outside if you wish to enjoy the beauty of the night. Otherwise, get inside and go to bed early, so to better wake up at dawn and witness the sunrise. 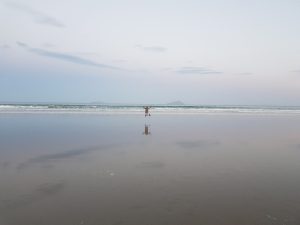 Our mistake of leaving the van doors open resulted in hordes of mosquitoes occupying every inch of our van. This meant hours spent clapping in the van, sweeping off the crushed bloodsuckers from the bed and shouting swear words. At some point it got so hot and sweaty I felt like needing another shower. I bet it must have been quite a spectation for our neighbors with the van jumping and bumping around, occasionally having a foot or palm banging the window, which of course was covered in mist from all the heat of clapping. 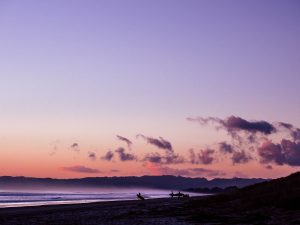 Despite our best efforts, few of the suckers survived and got their vengeance on us for their fallen sisters (since females are on a hunt for blood, while males are only on a hunt for love). Needless to say, we didn’t get much of a sleep as the rest of the night was spent in failed attempts to hide our body parts under the blanket and blindly grabbing air around us. 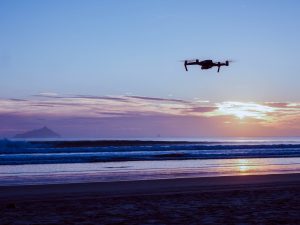 After enjoying our breakfast cereal with the morning view of Lion Rock in the beach, we went straight to the NZMCA, so not to risk missing it once again. By the way, after few days of traveling I can say, it turns out the idea of registering at NZMCA and purchasing a yearly DOC/NZMCA campsite pass was brilliant. Since staying past few days at the DOC campsites for free we have already saved 52 NZD (well, signing up at NZMCA was 230 NZD and the pass cost another 175 NZD but in few months staying at DOC sites, using ferry discounts of up to 40% and other discounts as for tyres it will be covered by all we have saved). If you are interested in more details about this deal, drop us a line and I would be glad to share more details about the membership and pass benefits (actually, it was just the beginning when I wrote this, after few months I can say we have already saved all the amount and even more what we paid for it). 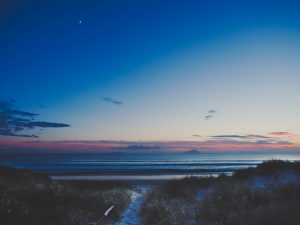 After sorting everything out with NZMCA, we also went and got ourselves an unlimited mobile data plan from the Spark. Funny enough, this was so to be reachable everywhere for family and blog, however, reception here is terrible and having the unlimited plan we can barely find the place from where we can connect and use the data. Especially if we are any further from the major cities, which we usually are. As we were ready to hit the road, we had a change of heart and went for Northland instead of going straight up South as we had initially planned. 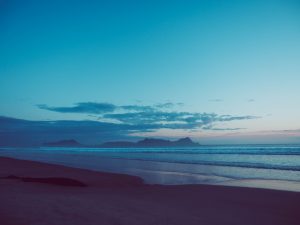 Last night we have ended up stopping at this amazing Uretiti Bay where we’ve enjoyed the peace of one again secluded beach walk and fell asleep to the sight of starry sky through our windows. But it was the morning that was quite one to remember as we got up at 5:30 AM rushing to the beach to greet the first light and meet the sun. 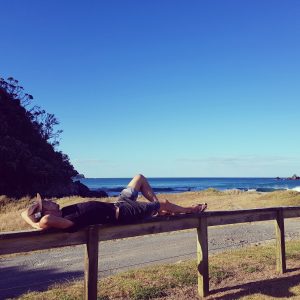 Besides few surfers in a distance and quite a few seagulls attacking Algirdas’ drone in the air, we had the beach and the sunrise all to ourselves. As ironic as it sounds, having nowhere to get to in the morning, makes waking up early so much easier. After a peaceful morning and quite few video calls back home to share the excitement with our families, we packed our home up and like a little snail our Hiace left Uretiti bay behind bringing us on more of caving and beach life adventures. 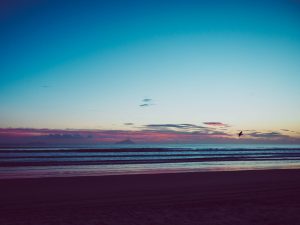 The Van and Other Preparations (a.k.a. Vanlife Begins)