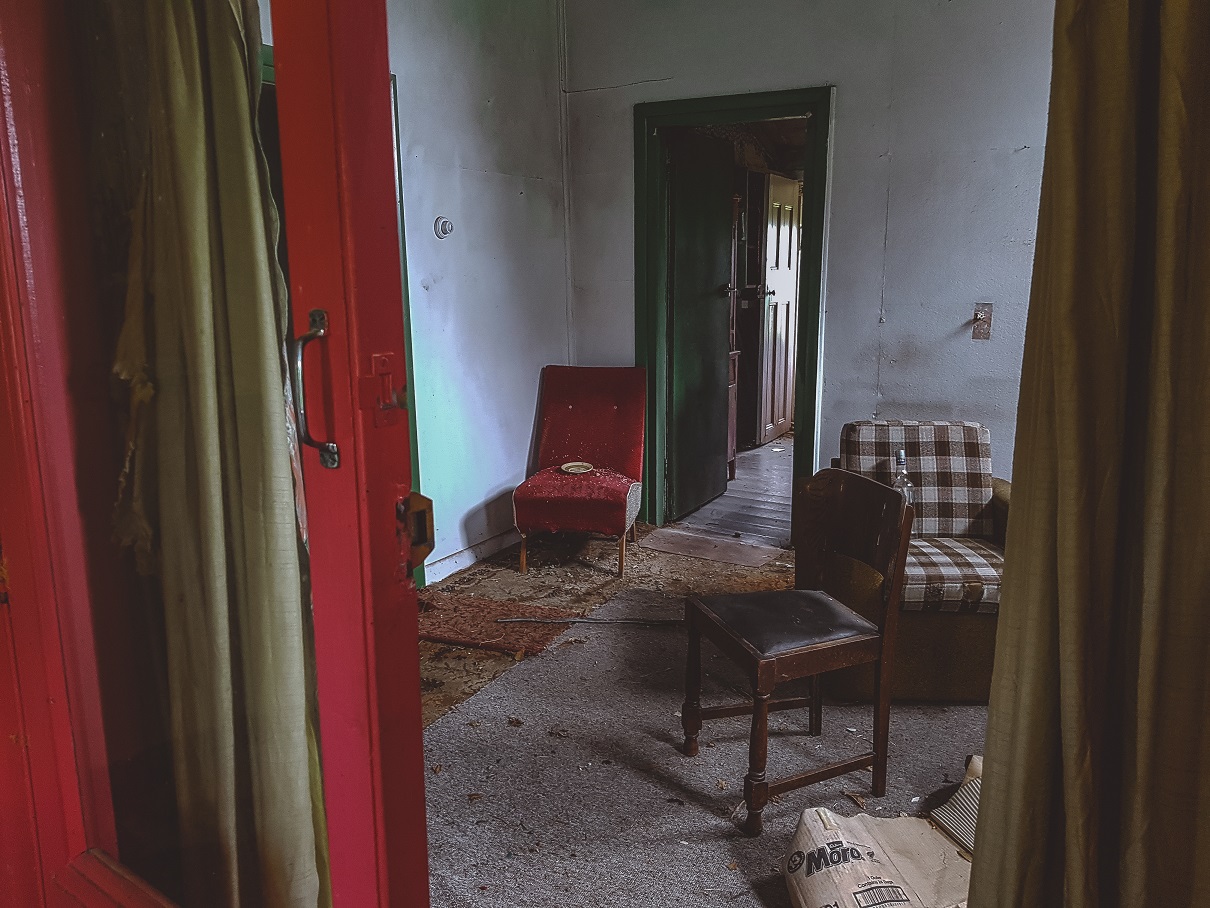 Do you know what I love the most about being a full-time traveler versus just traveling for a few weeks holiday? It’s the ability to take time and enjoy the little things, which you might be forced to skip when having a tight schedule. Waiuta may not be an obvious holiday destination in New Zealand but it is one of those places you love to explore, especially if you have time to spare without risks of missing out on one of the ‘ultimate must visits’. And since we are here (New Zealand) for one year, it is safe to say we could allow ourselves to spend a rainy afternoon exploring the mysterious ghost town of Waiuta. 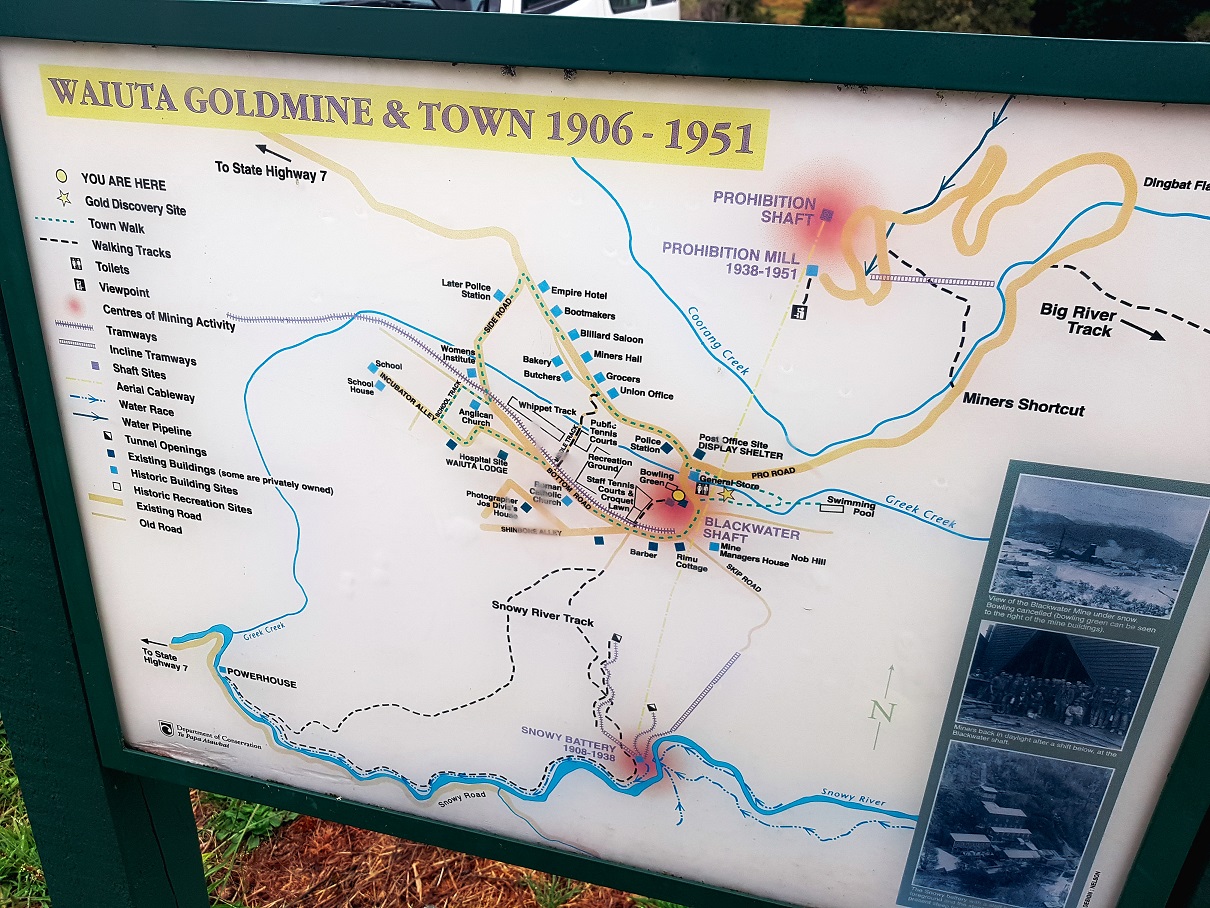 An informative board will help you get around the site

Ghost towns or what remains of once booming industries

Waiuta might be one of the better-known ghost towns but it is just one of many in New Zealand. West Coast is even known as the capital of the ghost towns since it is a home to nearly 70 of them – remnants of once booming gold, coal and timber industries left to decay after the riches ran out. 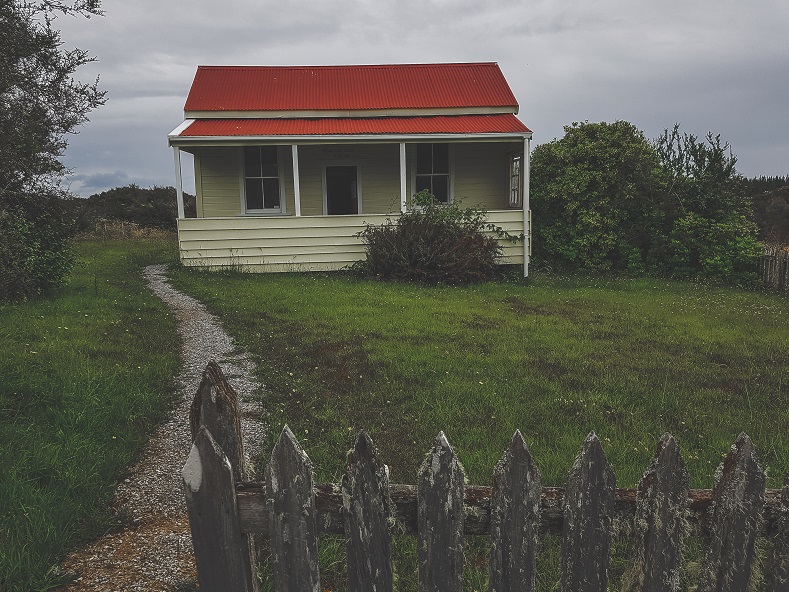 This was a girls cottage currently under renovation by volunteers

We chose to visit Waiuta by a chance I guess. First of all, we both love the urban exploration and discovering abandoned places (hence my favorite type of computer games – searching and looting in post-apocalyptic/fantasy setting), so visiting some ghost towns was always on our list. As it happened, we were faced with a bit of rainy weather that day and in no way, we would have reached a sunny destination, so googling what’s on the way we’ve come across Waiuta – the abandoned gold miners’ town. Since it was already on our way (well around 20 km sideways), it didn’t hurt to check out. After all, if the weather turned really bad, we were traveling with our home on wheels. And quite frankly, we couldn’t be any happier with our decision, since a) we had the town to explore all to ourselves; b) a little bit of drizzle and the fog just gave that extra notch to the experience of ghost town exploration. 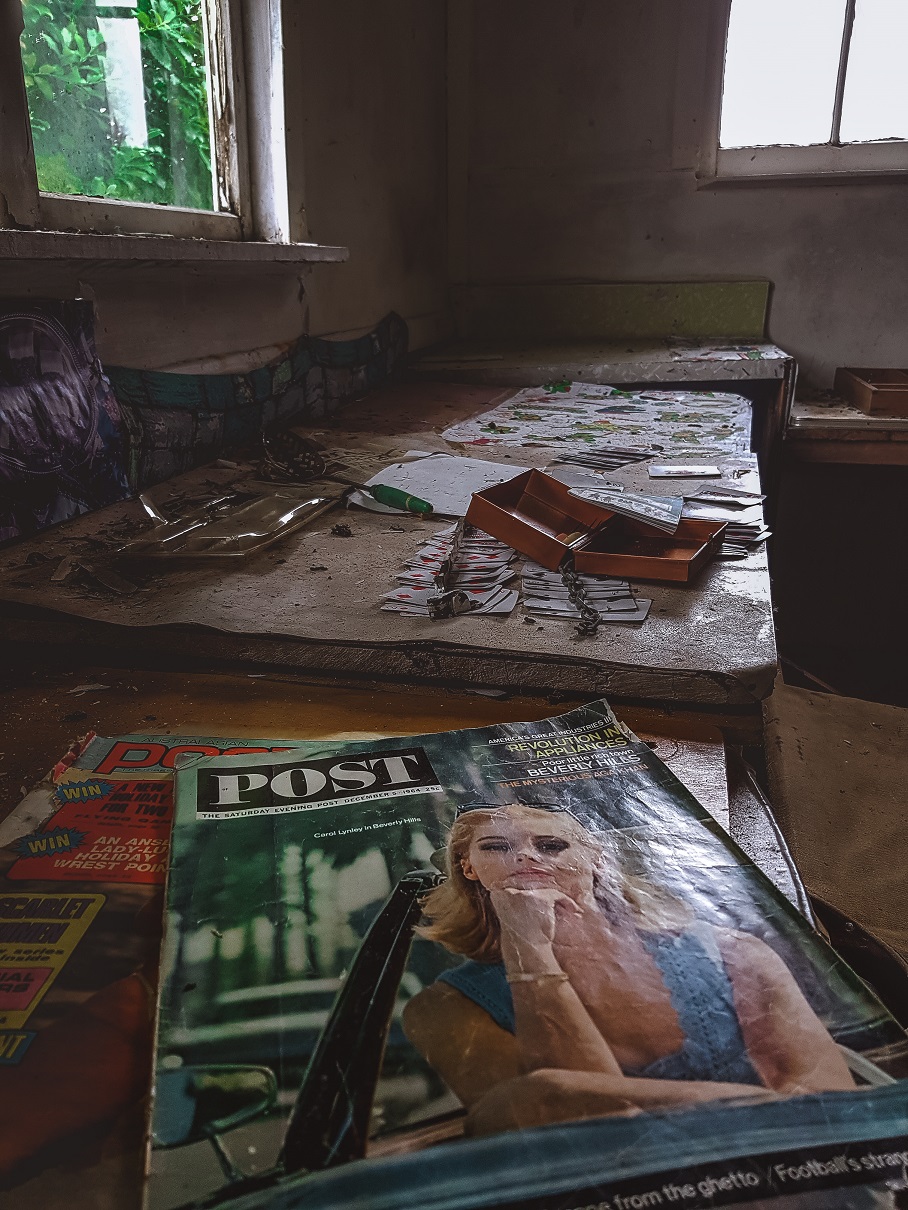 What remains of those who left

Getting lost in ‘post-apocalyptic’ universe

Even though not much of the town remains, there are still quite a few buildings preserved that you can enter and wander around. I’m sure my fellow scavenging and mysteries’ enthusiasts will appreciate it. Looking through all of that is left behind to decay made me feel like a character trying to put the pieces together and solve the case of what had happened: old dishes in a sink, issues of the ‘BusinessWeek’ and newspapers from 1960s’ lying on the ground, some playing cards scattered on the counter, a hidden shed door disappearing behind the leafy vines, beds and their broken mattresses’ springs, some rat poison and a bunch of science books – all telling stories of the people from a different time. 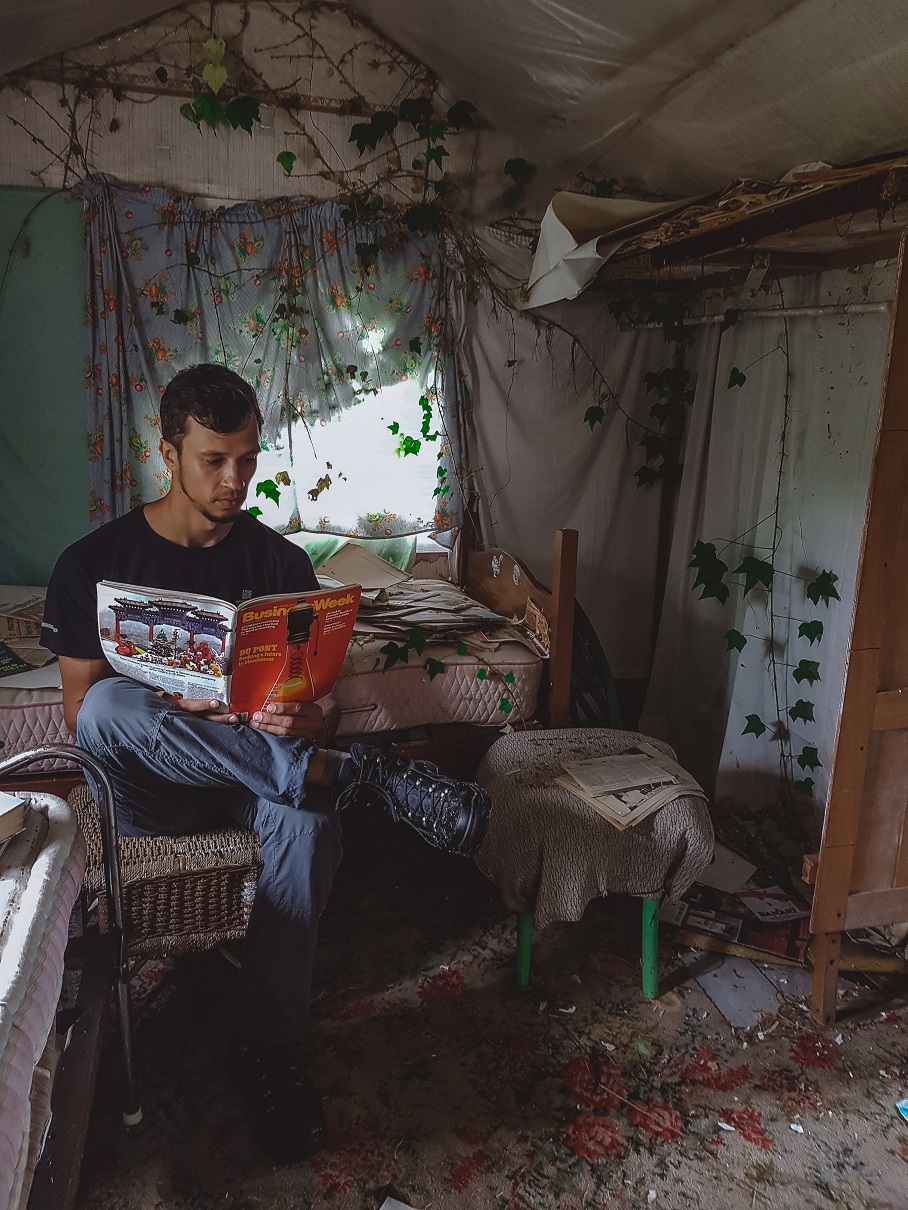 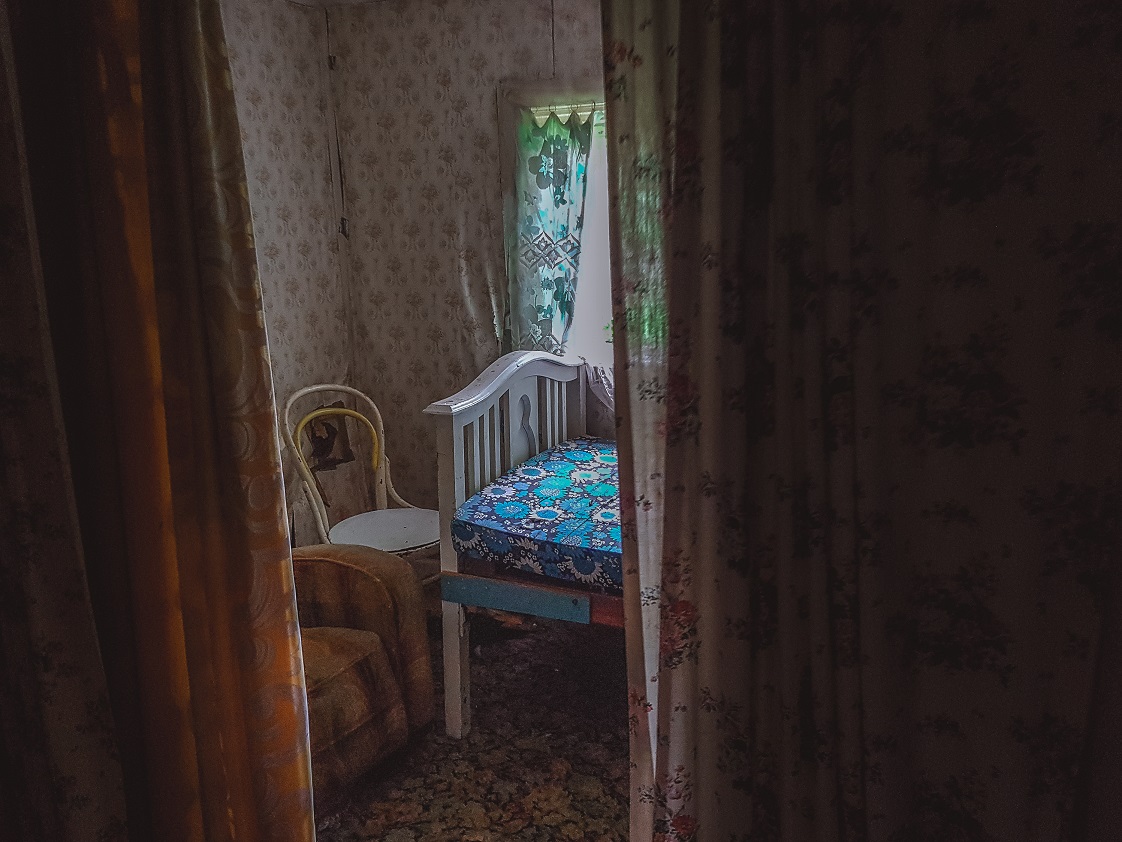 Just one of the rooms remaining 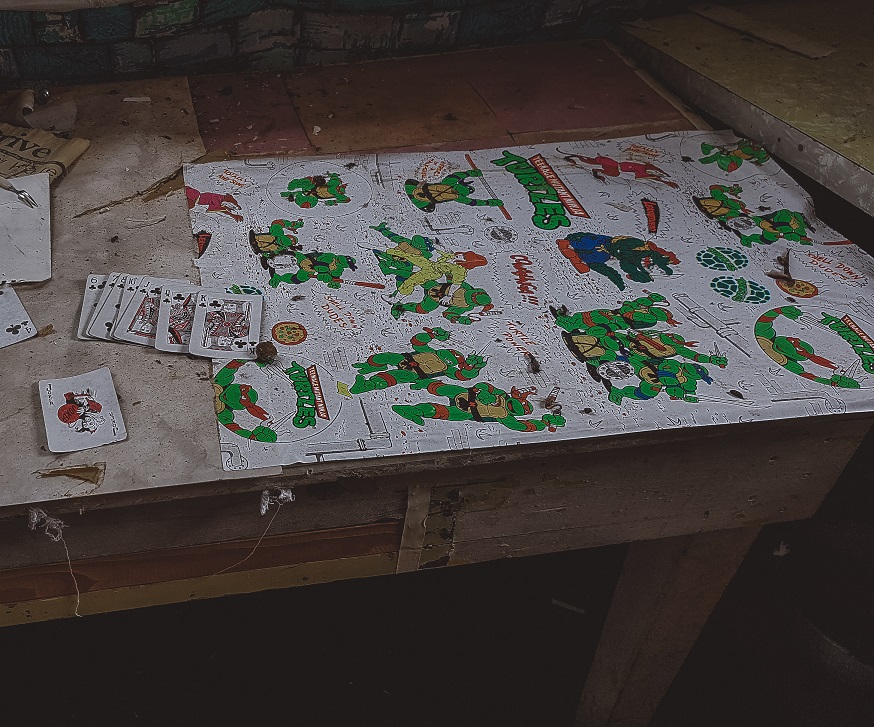 Seems that Teenage Ninja Turtles got here as well

The human footprints are slowly fading away as mother nature is reclaiming back what once was hers again. At least that is what you are left thinking with each house you visit and each vine you notice growing inside. Anyways, if you’re anything like me in terms of loving the post-apocalyptic world theme, this definitely can give you a perspective of a scavenger coming by an old house, let’s say in ‘The Walking Dead’ universe (yes, I know I may have been watching too many tv shows and playing too many games in the past). 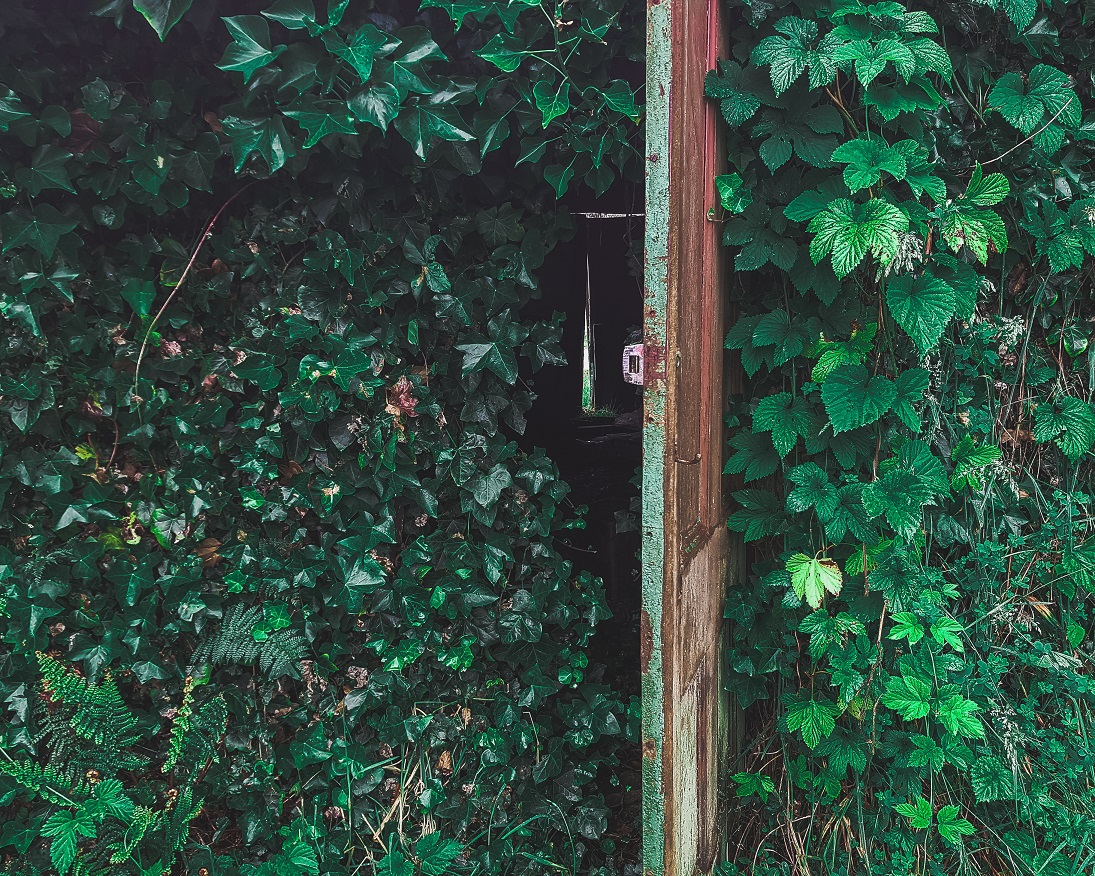 The shed door can easily be missed between those vines 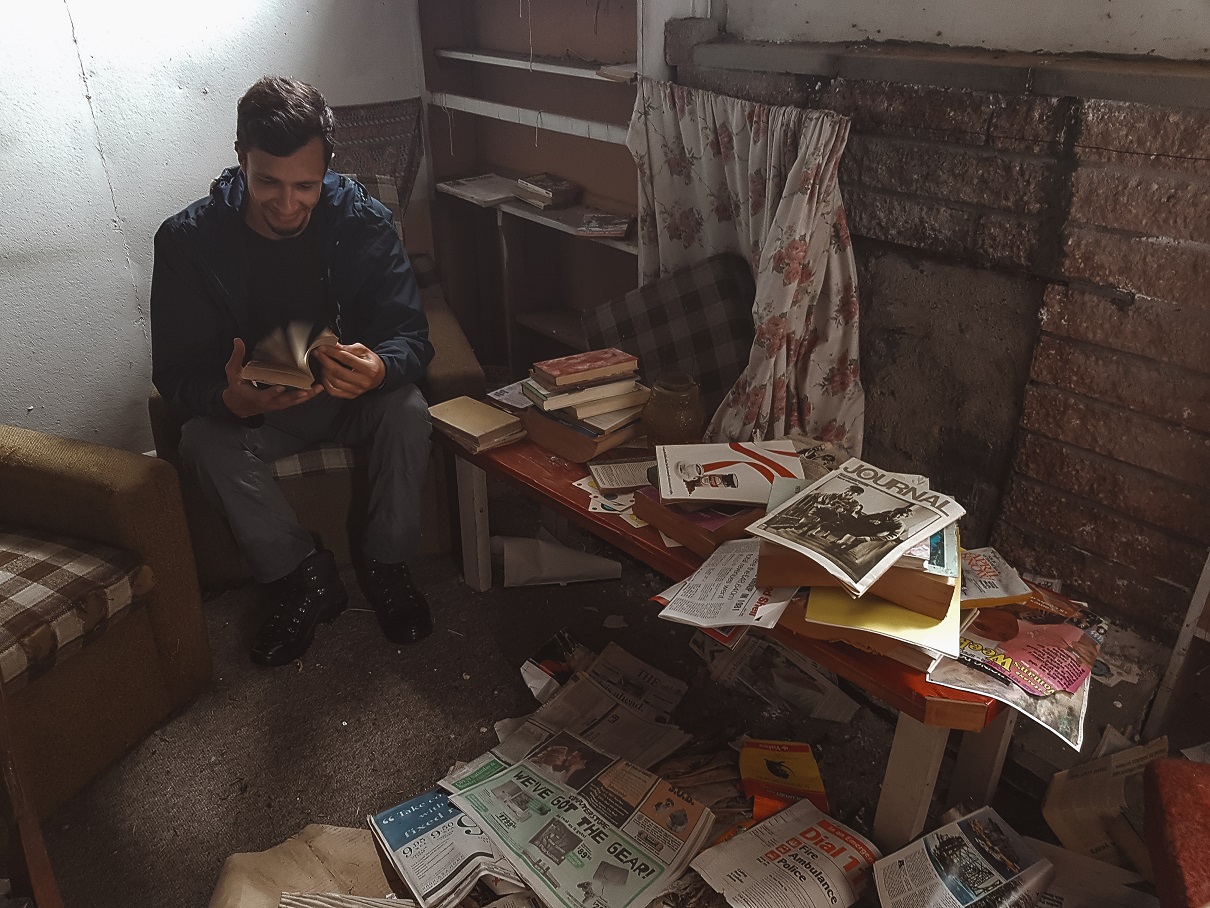 Never know when you’re gonna find something good to read

For those outdoorsy type, even if Waiuta might not have the most spectacular scenery, there’s still a bunch of walks around the town’s streets and forest to the nearby battery, powerhouse and mine sites. We’ve started our visit at the gold discovery site ‘Blackwater shaft’, though, if you have any hopes of getting inside the mine, let me disappoint you as the grounds are too unstable and all the shafts are sealed off. 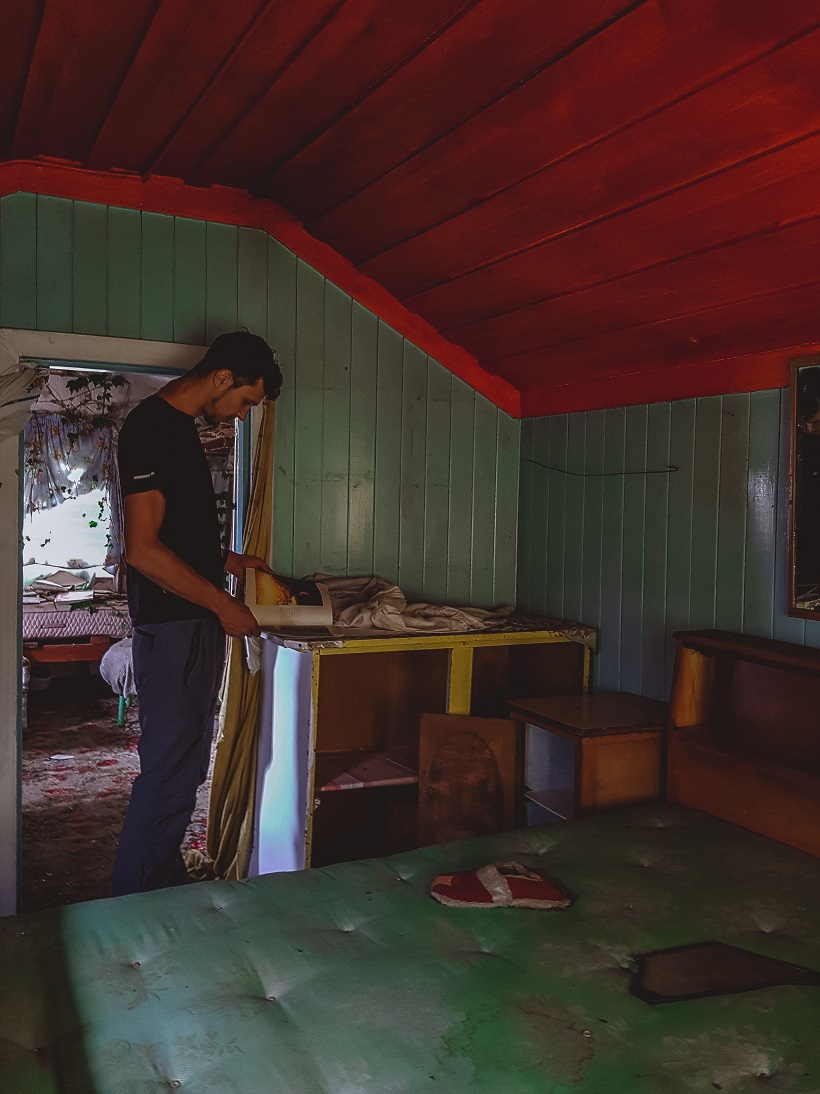 After visiting what’s left of the old police station we took a stroll to the swimming pool and on our way back to the post office site we were pleasantly surprised by an unexpected discovery. Now, if you ever there, try not to walk past it but as you’re walking from the swimming pool back towards the post office, you may spot a small tunnel opening under the tree on your right. If there’s a hole it must lead somewhere, right? Well, how could we resist finding out where it would take us. I do not wish to spoil it for you, but if you ever there, try and go through the tunnel all the way (it is short). Even though it was quite small, being an unexpected discovery gave us such a rush of excitement as we felt like Indiana Jones on his adventure. 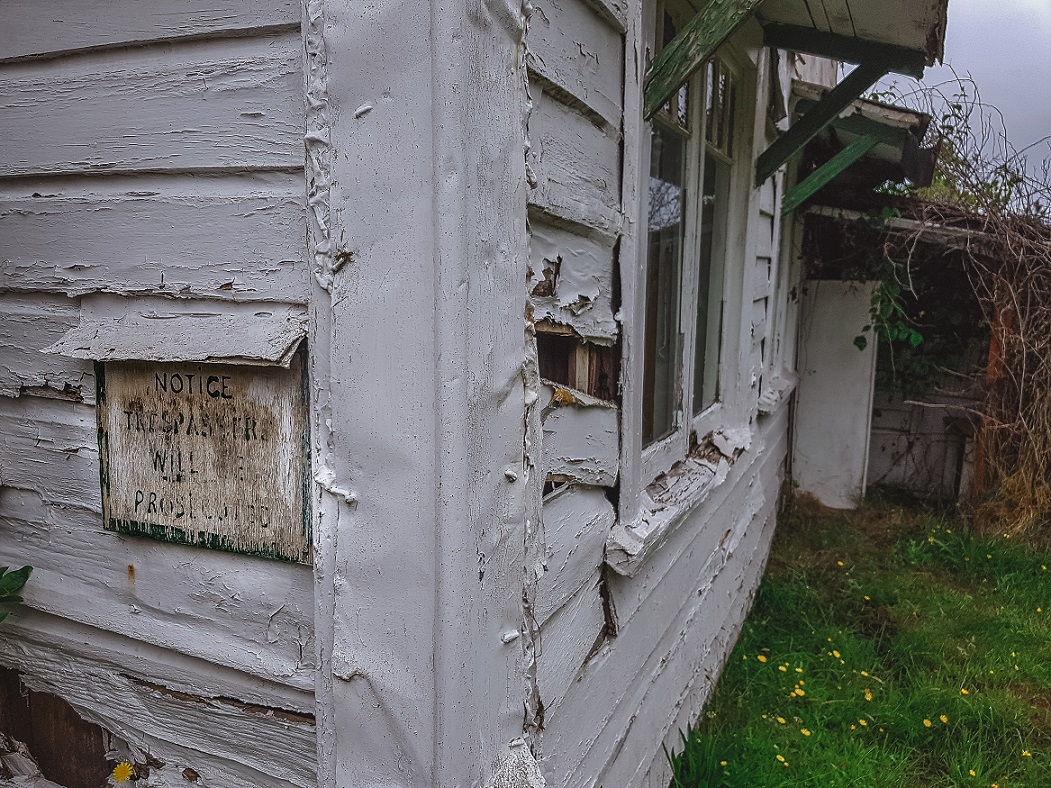 Notice – Trespassers will be prosecuted 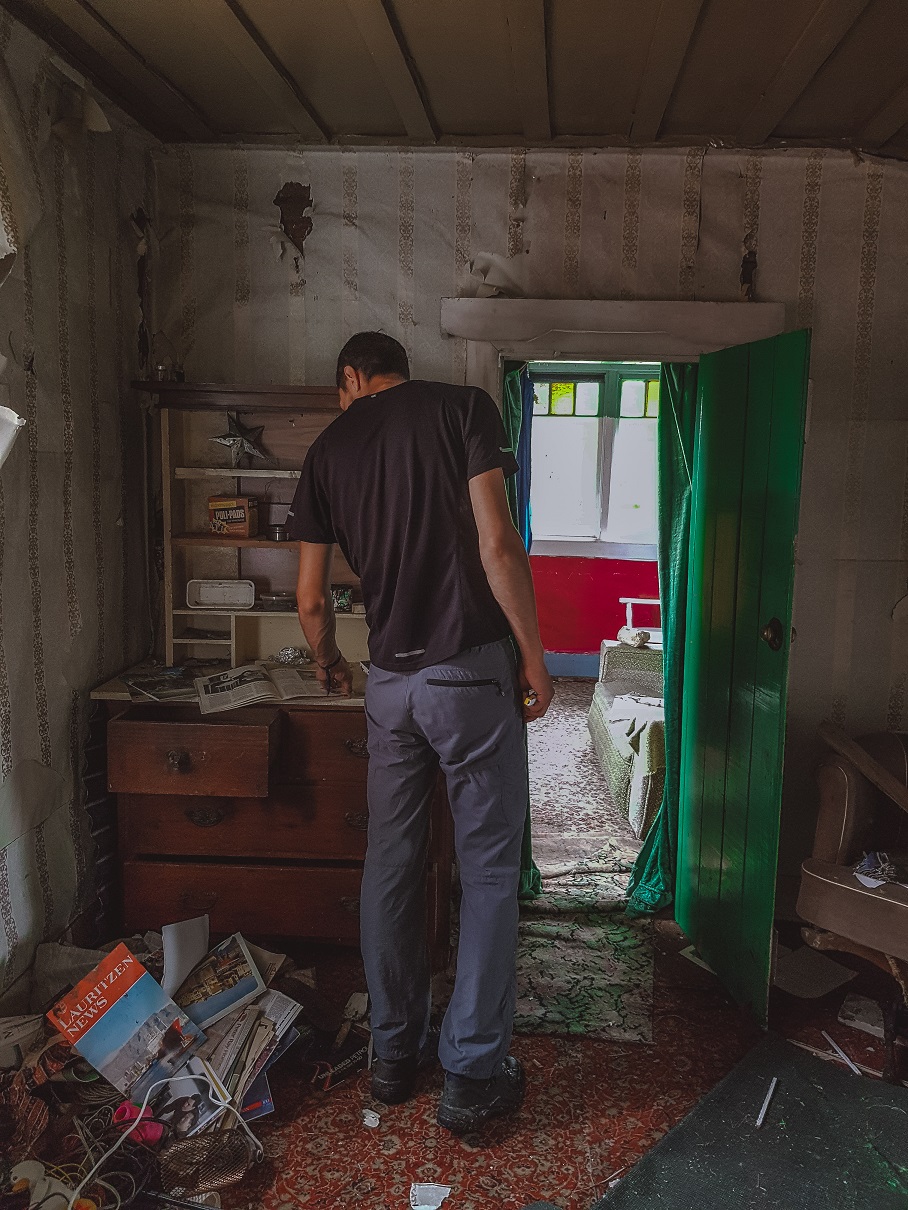 The tunnel was not the only adventure that day since we decided to go for a 1-hour return walk to the Snowy Battery, where back in a day quartz was crushed to free the gold. Even though it was supposed to be a rather short walk, it may have taken a bit longer, as the 30 min to the site was downhill and easy, however, going all the way back uphill and having no water with us might not have been the smartest decision ever. However, the walk to the site is really nice, it takes you through the woods all the way down to the river and gives an opportunity to enjoy the view of the valley below. Unfortunately, it was soon getting dark and since we had no drinking water with us we have decided to skip on another 2-hour loop walk to the powerhouse by the river and took the same root back to the town. 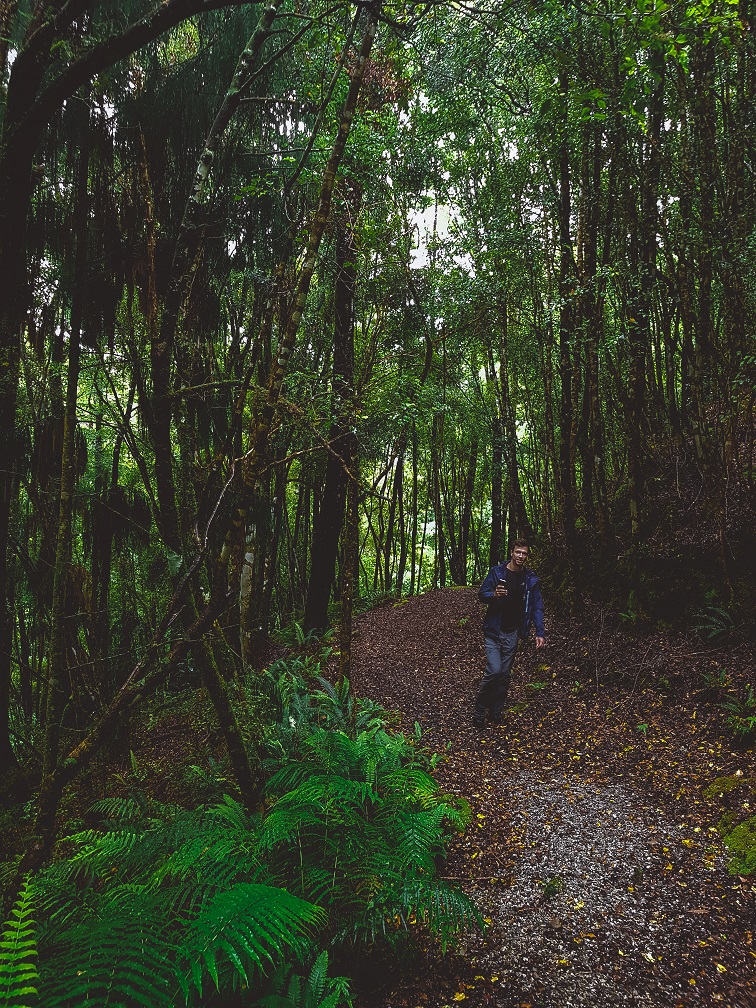 The path to the Snowy battery takes you through the woods 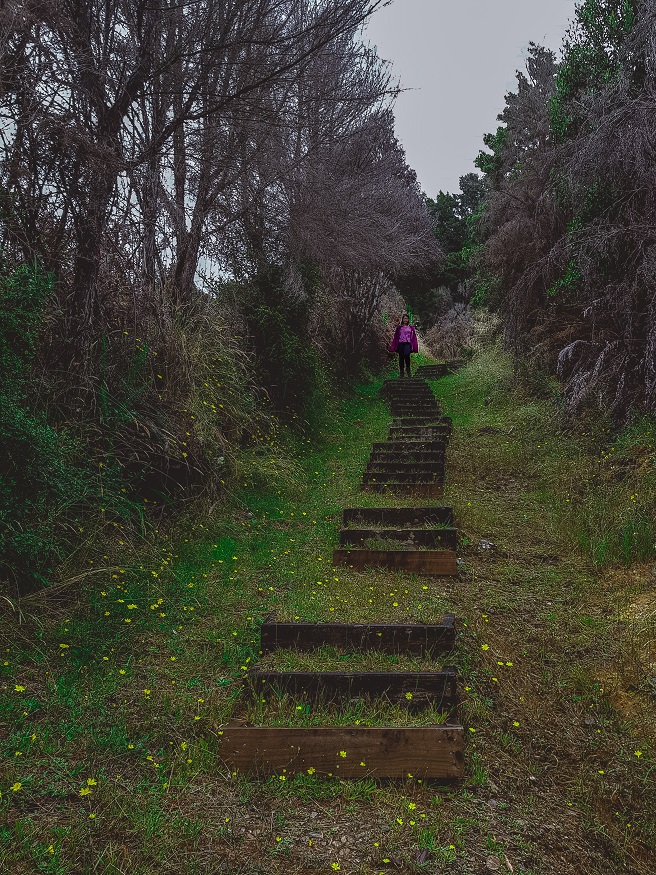 Yes, I was also there (proof) 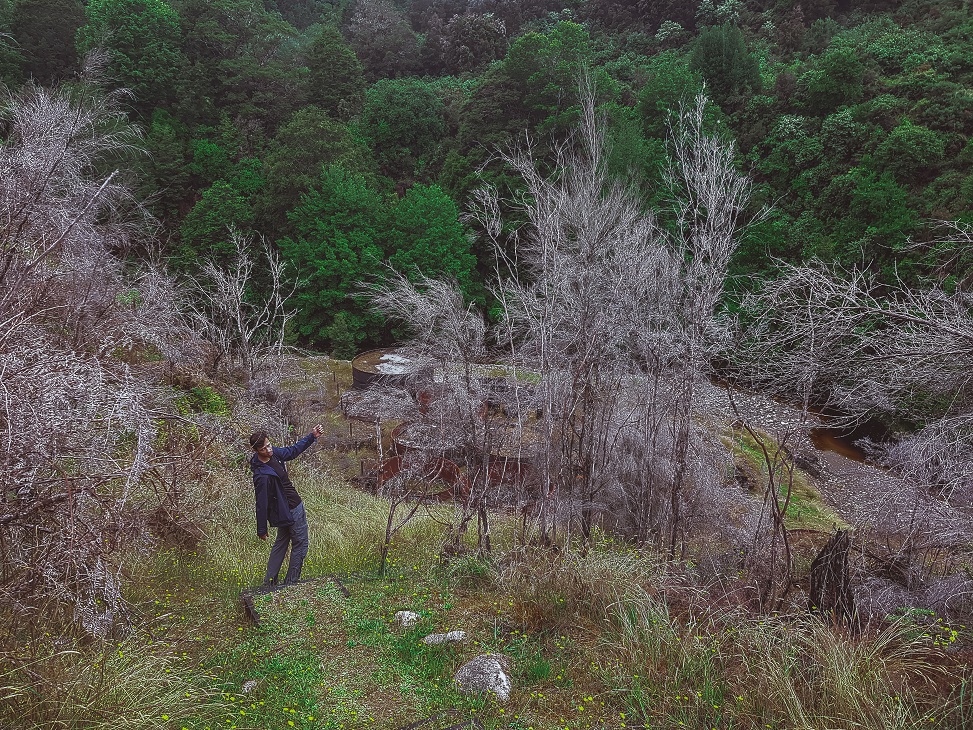 Almost there, just a few more steps to the battery

Prohibition mine and mill

After wandering through the remaining buildings in town, we’ve decided to make the last stop before leaving Waiuta behind – the Prohibition mine and the mill. Prohibition mine was once the deepest mineshaft in all of New Zealand stretching 879 meters straight down, of which the last 300 meters were below the sea level. On a clear day, the Prohibition mine is said to be a place from where the Southern Alps and Mt. Cook could be admired, however, I can’t either deny, nor verify the statement since our visit was on a foggy afternoon. 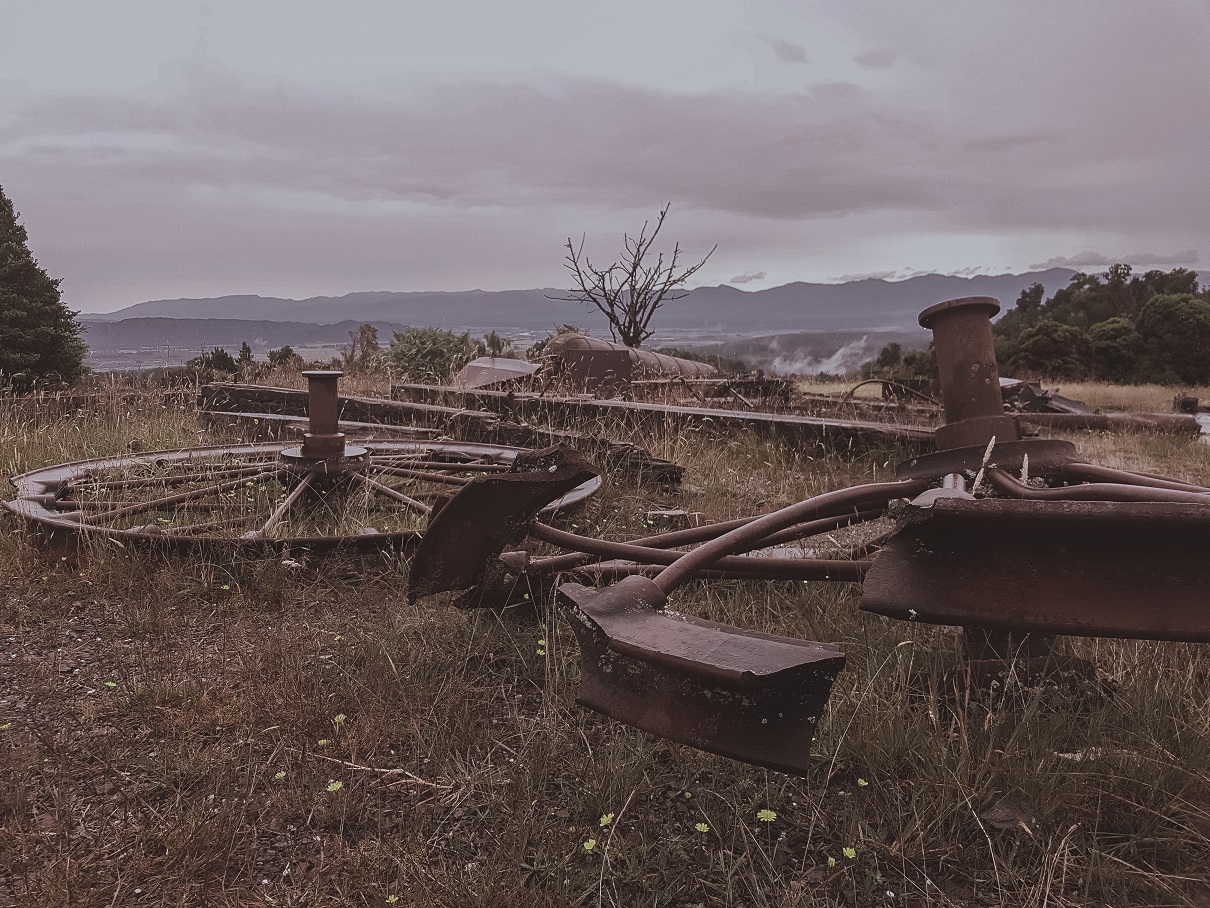 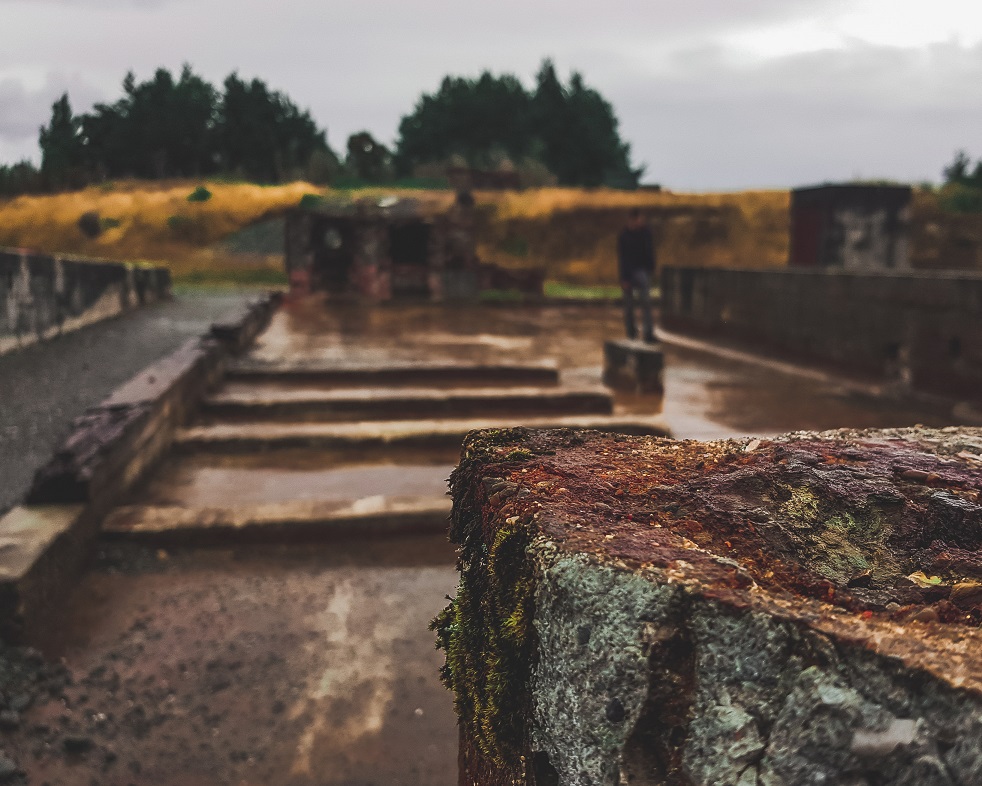 The site of the Prohibition mine and mill

Waiuta once was one of the richest gold mines in the West Coast. It grew from the last great gold discovery in the region back in 1905. Unfortunately, the WWII took its’ toll on the mine as many men left to war never coming back, what led to miner numbers reducing from 240 to 113. The amount of gold has eventually reduced as well, which made it difficult finding new workers. Eventually, the mine was closed officially in 1951 after the collapse of the Blackwater shaft flooding the mine. Having no alternative employment options, villagers had no choice but to eventually abandon Waiuta, leaving little behind. Majority of the buildings were taken apart so to use the materials in new settlements. Only a few stayed behind leaving more visible human footprints, which are now already fading away. 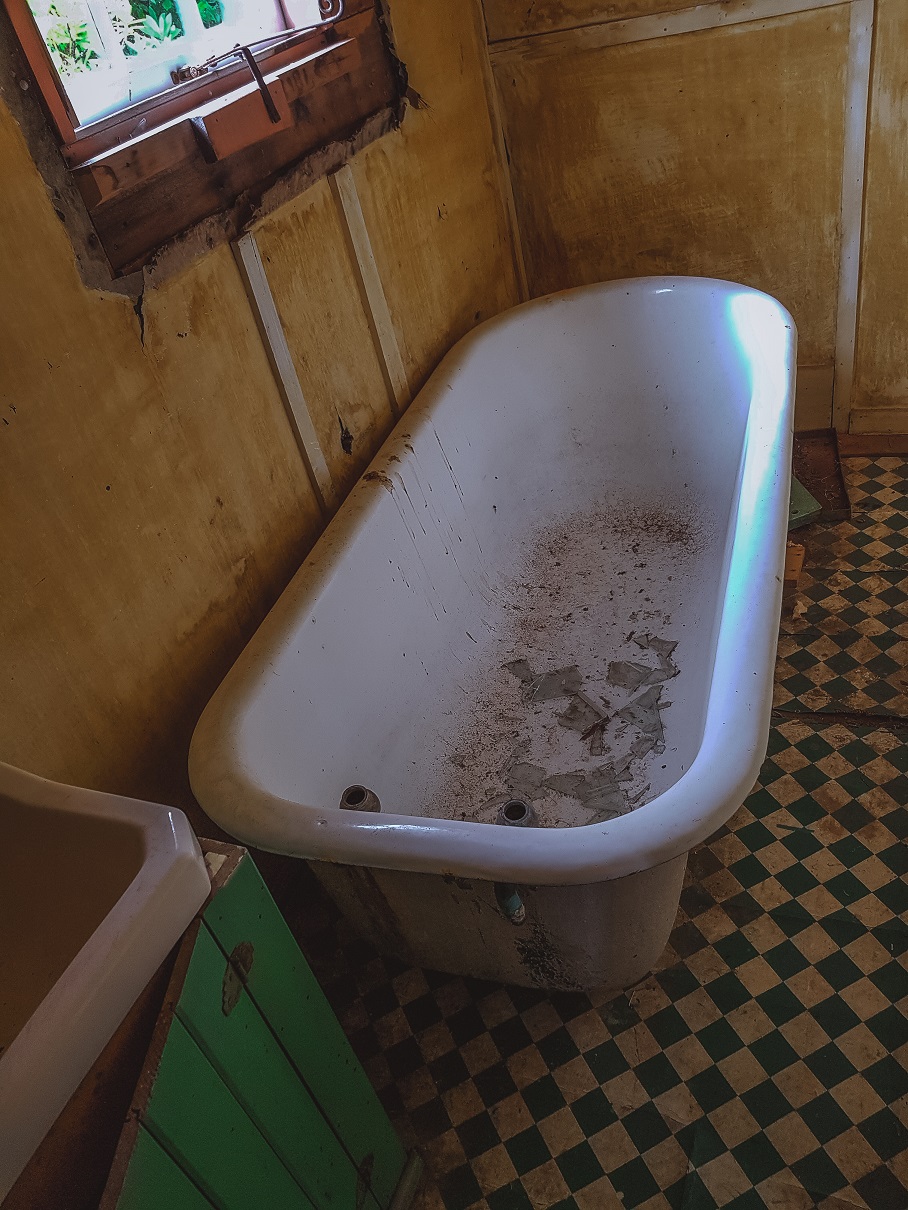 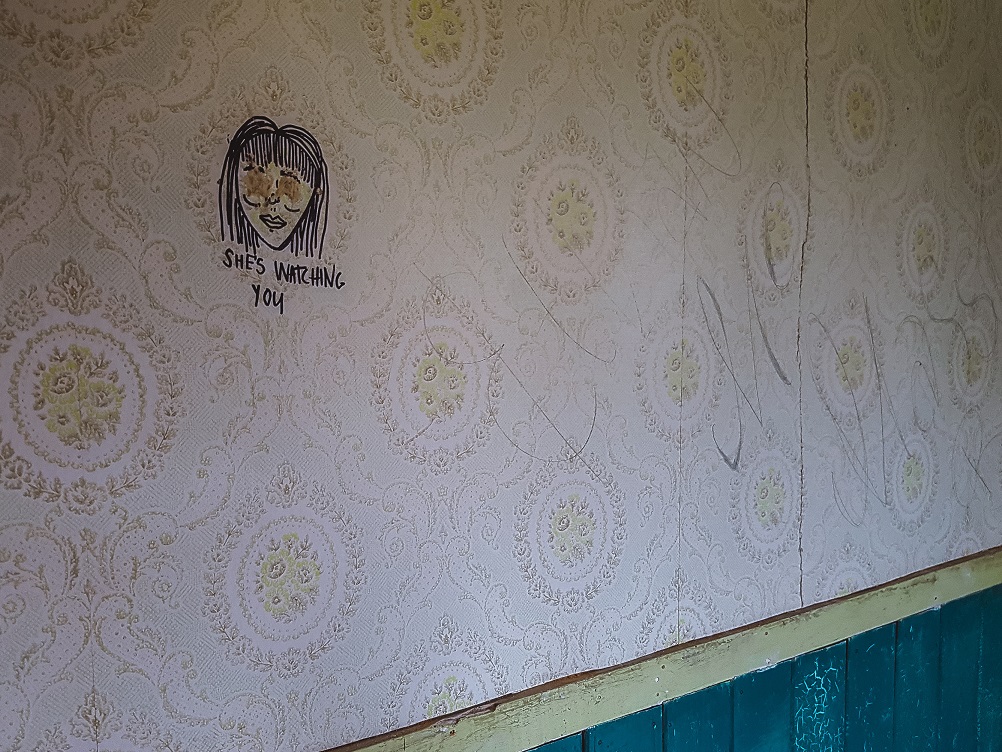 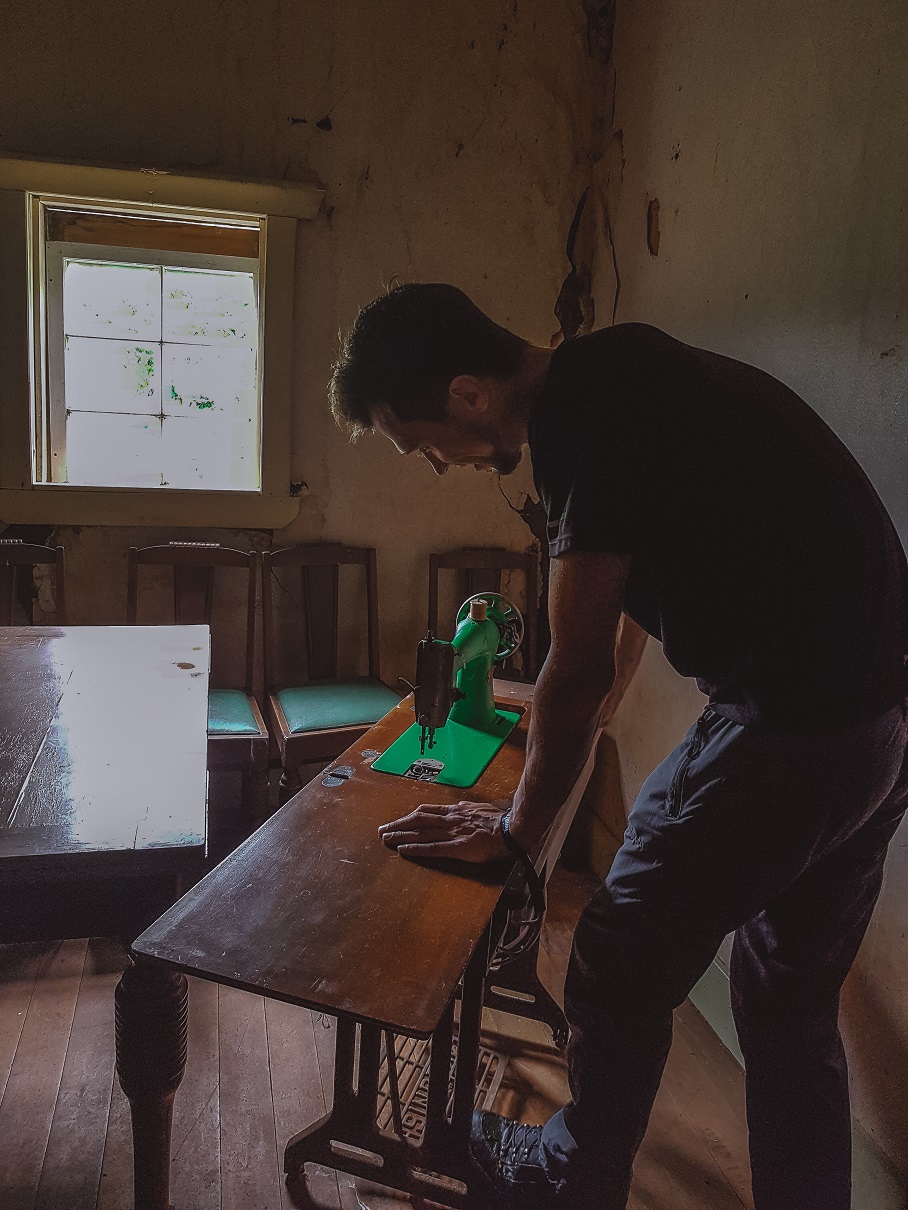 Al taking on some crafting 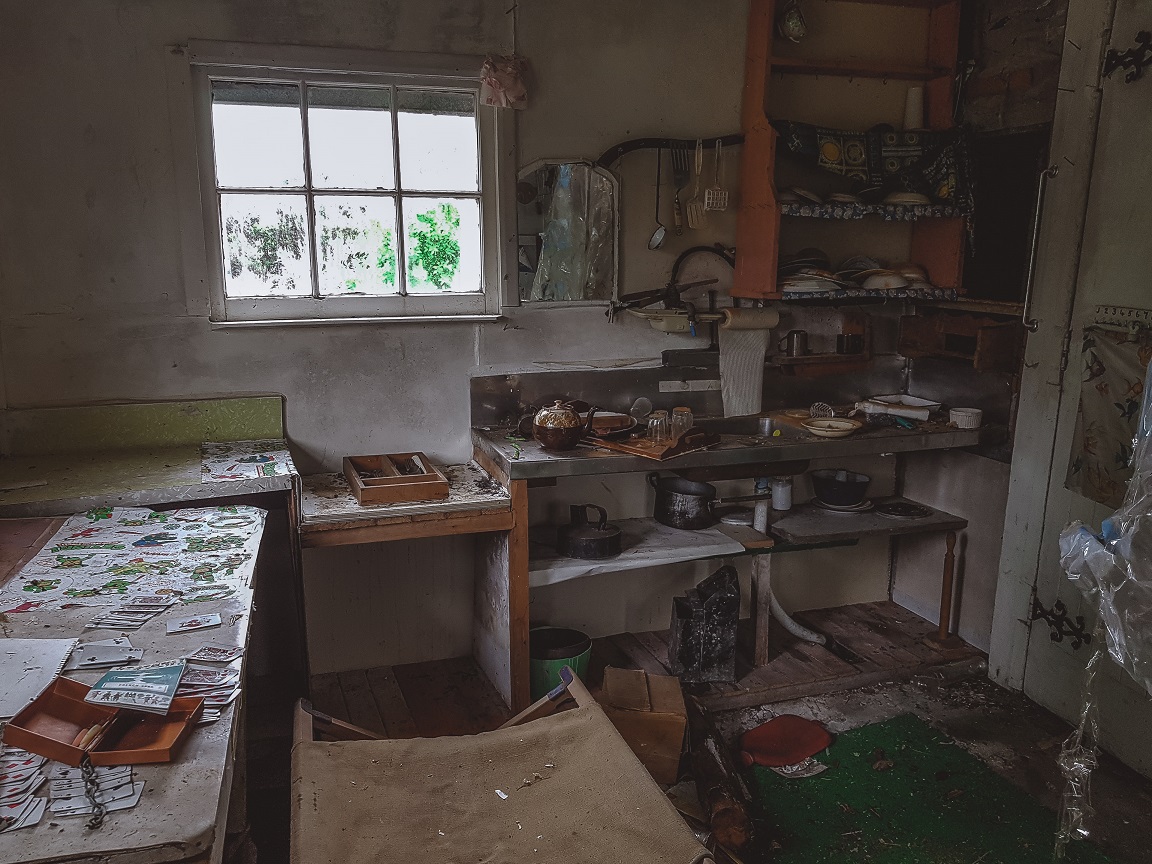 Found it interesting? Pin it for later! 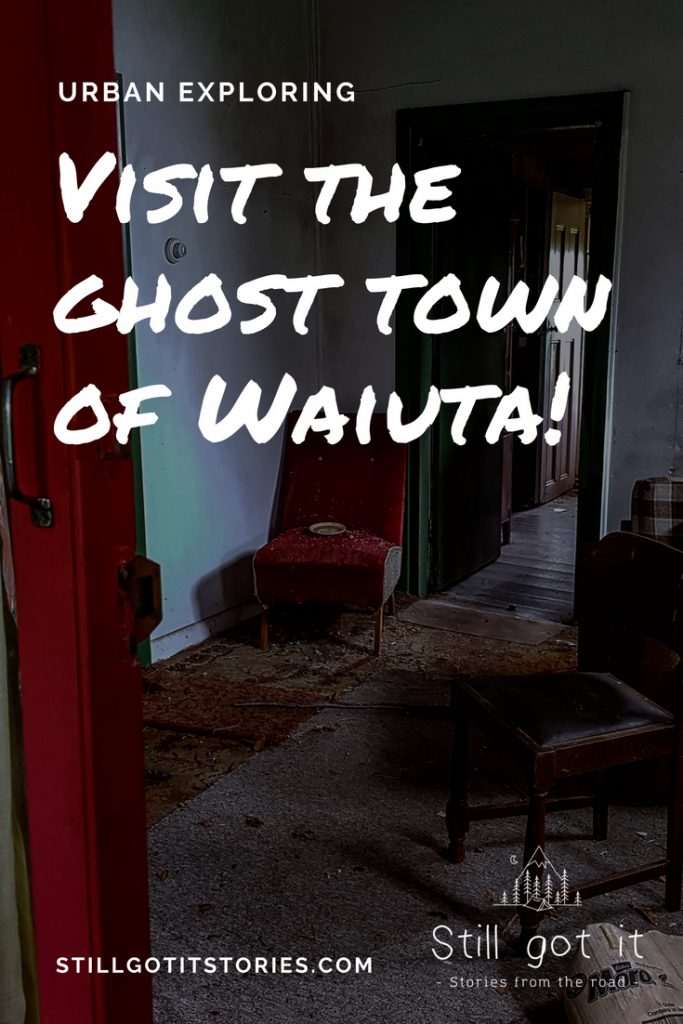