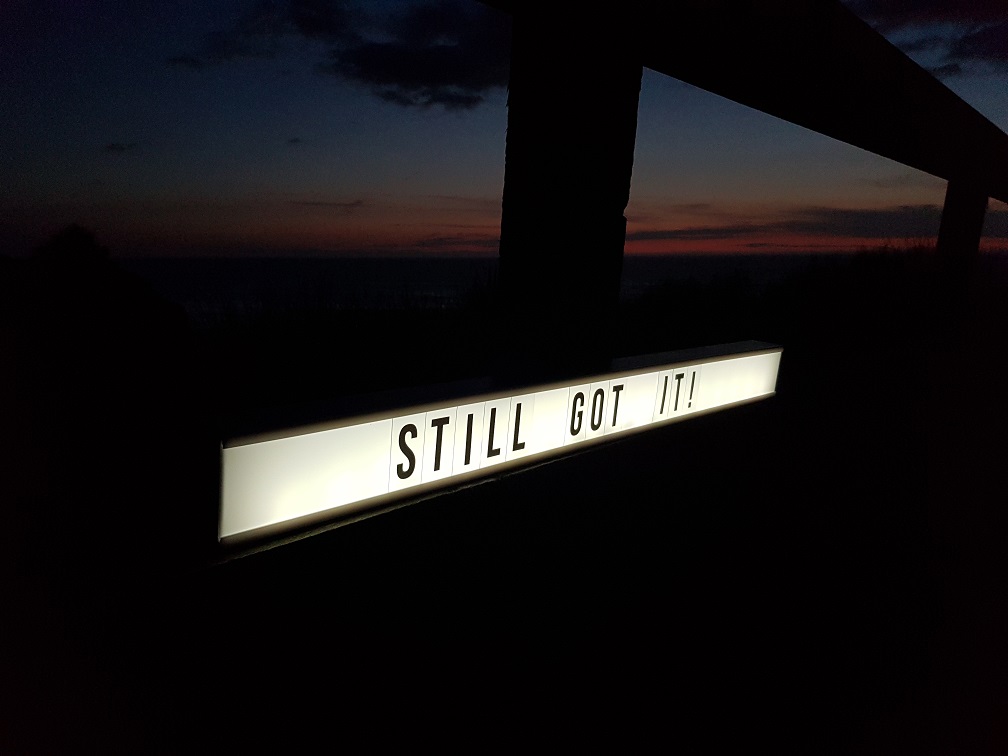 Do you know that feeling when traveling you suddenly realize you no longer know which day of the week it is, and you don’t really care as it no longer has any hold on you – it doesn’t have any meaning for you or carries any limitations on your life. Well, we do and we love it!

The few weeks following Christmas were pretty eventful and we had completely lost the track of time. The holiday season in New Zealand: Christmas Eve exploring Taranaki district, beach celebration of Christmas in New Zealand, the craft beer pub crawl in Wellington and the raving New Years were incredible. But let’s start from the Christmas Eve at Mt. Taranaki, where we had left off. 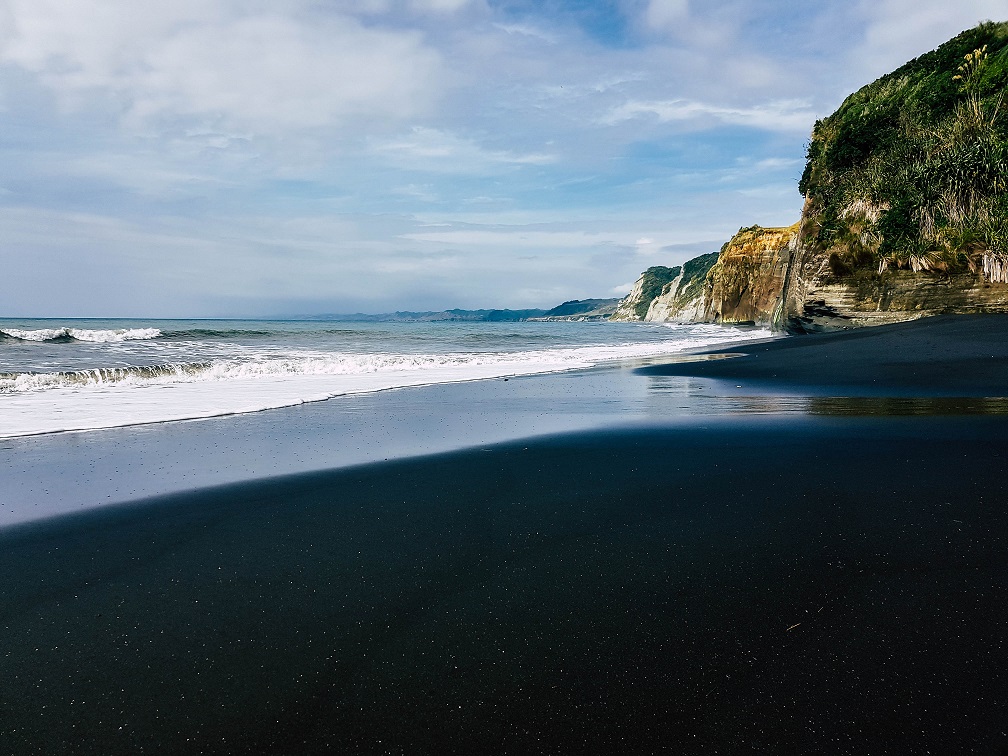 After falling asleep to a perfect view of Mt. Taranaki in the background of a clear sky full of stars, we woke to a pouring rain and fog preventing you from seeing anything further than your arm-stretch. Easy to say that idea of celebrating Christmas Eve by hiking Mt. Taranaki was ruined. No hurt feelings though. So we grabbed ourselves a quick lunch in New Plymouth and headed back the road we came to explore all the beaches and cliffs of North Taranaki that we had passed last evening. 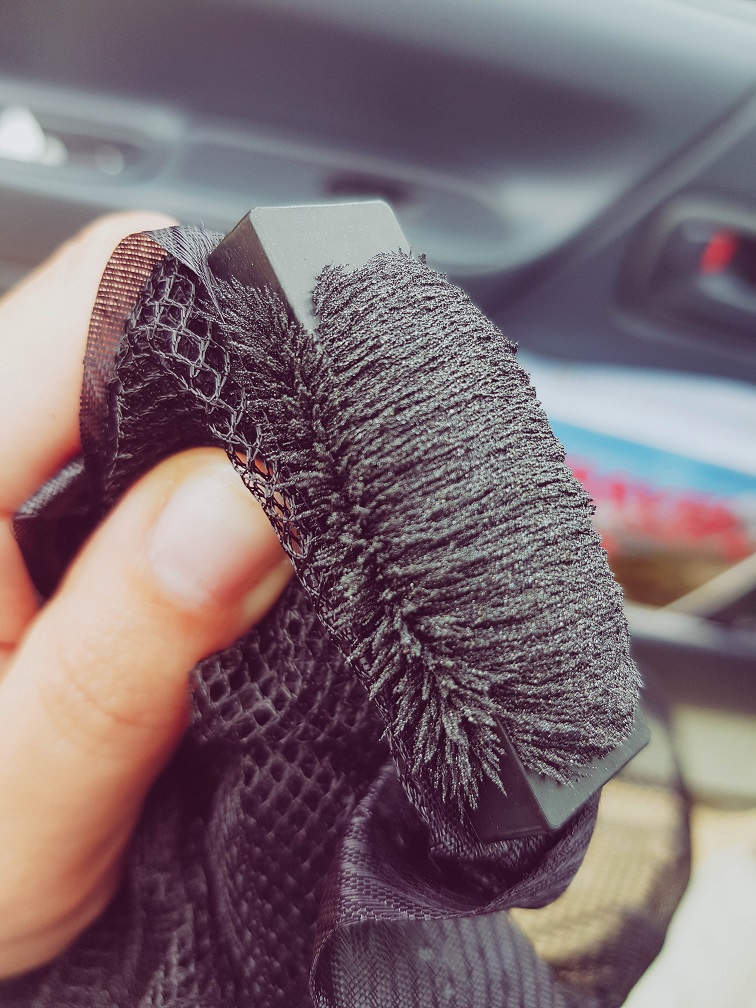 Magnetic sand stuck to the magnet

Sadly enough, we had not gotten used to the significance of tides around here and forgot to check the timeline for the tides (in Lithuania we pretty much do not have any tidal impact on our Baltic sea which is quite different from the tidal changes in New Zealand). So, coming at the peak of the high tide, we’ve missed the three sisters (in fact only two are left as the third one collapsed some time ago) as there was no possibility to access the rocks at the beach.At least we got to enjoy the view and magnetic effect of the opaque black magnetic sand beside the waves crashing on the white cliffs. We also tried accessing the marked spot for the best view of the cliffs, unfortunately, the road was closed off with a sign indicating this to be a private property and notifying trespassers would be prosecuted. I guess we might have risked it if not for the angrily looking farmer and his barking dogs staring at us from the nearby property. 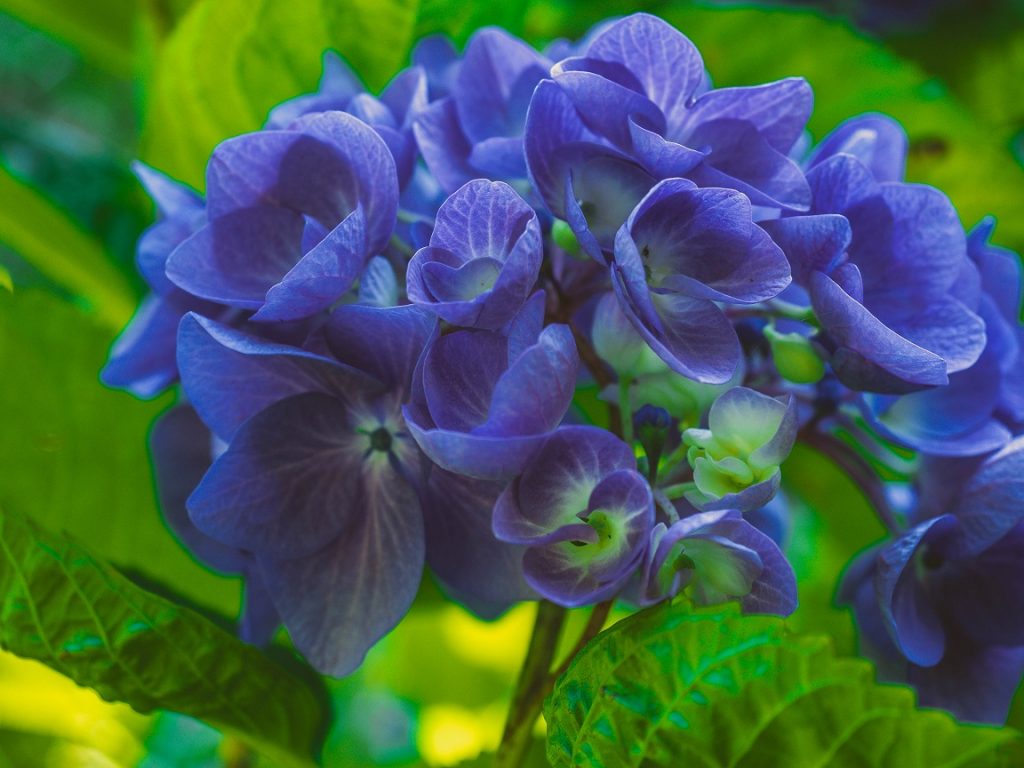 After scouting some beaches and cliffs we’ve turned back towards New Plymouth where, surprisingly, the skies above Mt. Taranaki were clear and bright once again. Since it was getting late already and next day (Christmas) was supposed to be quite a rainy day at Taranaki, we decided not to risk staying anymore but still took a side trip to enjoy the mountain view from lake Mangamahoe (which is actually a really beautiful lake park and if you have a self-contained vehicle, I believe it is even possible to freedom camp around there). If not hiking around the volcano, this is a place where you can get some of the most stunning views of the volcano in the distance, though a clear day is required. 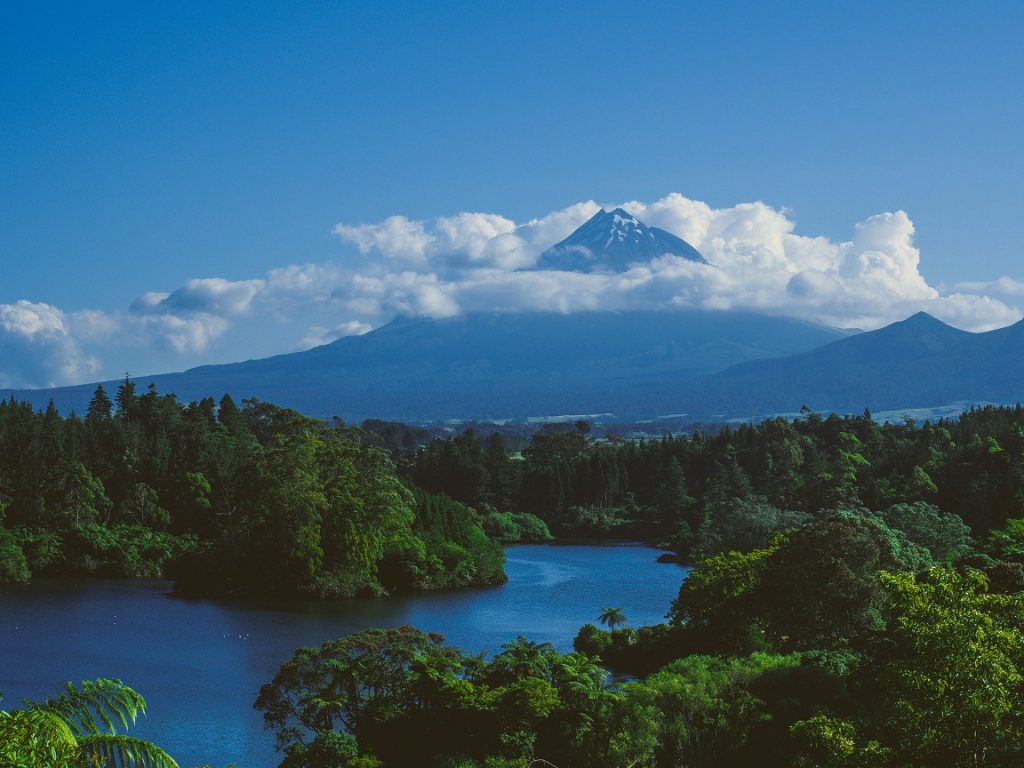 It was getting late and we haven’t yet decided where to go for the night. At this point, we just decided to trust our fate and chose a random beachfront campsite on a map and hit the road. That is how we ended up at Waverly beach – perfect freedom campsite on top of the beach cliffs with a stunning view. Originally, we intended to stay at a paid Waverly beach campsite (which is really great and only 10 NZD for an unpowered site for 2 persons) but for it being Christmas Eve, the library for payments was already closed.Lucky for us turns out there was a freedom campsite right on the beach with all facilities. Not to mention the stunning views at the free campsite, which, of course, led us to the freedom camp choice. 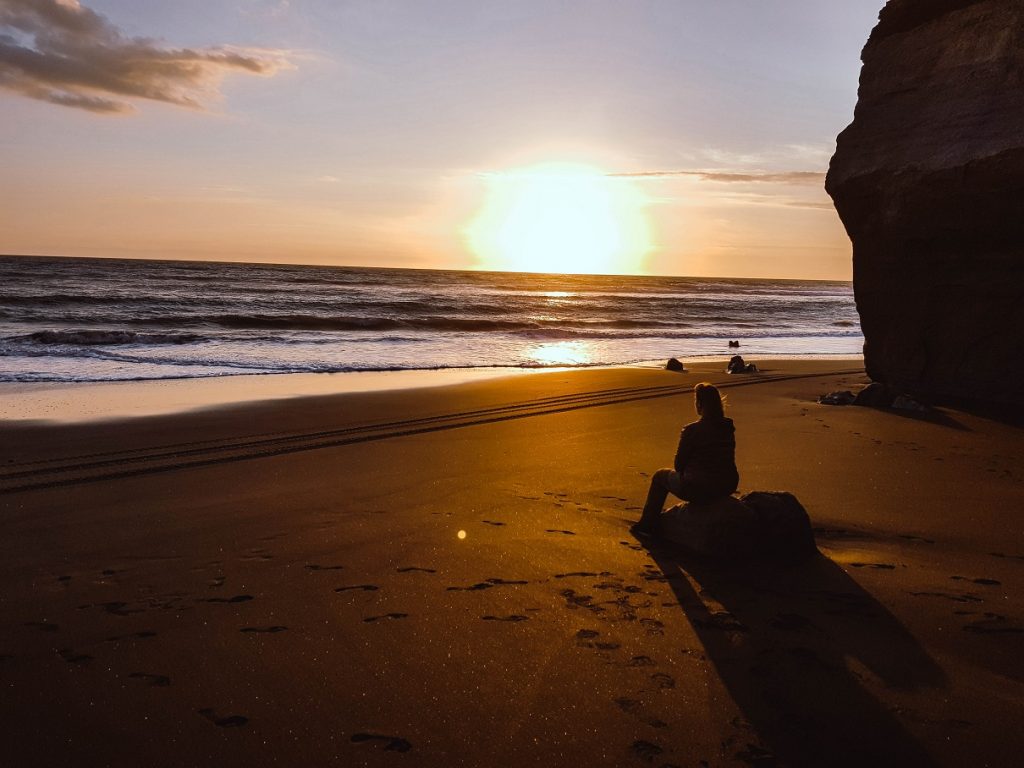 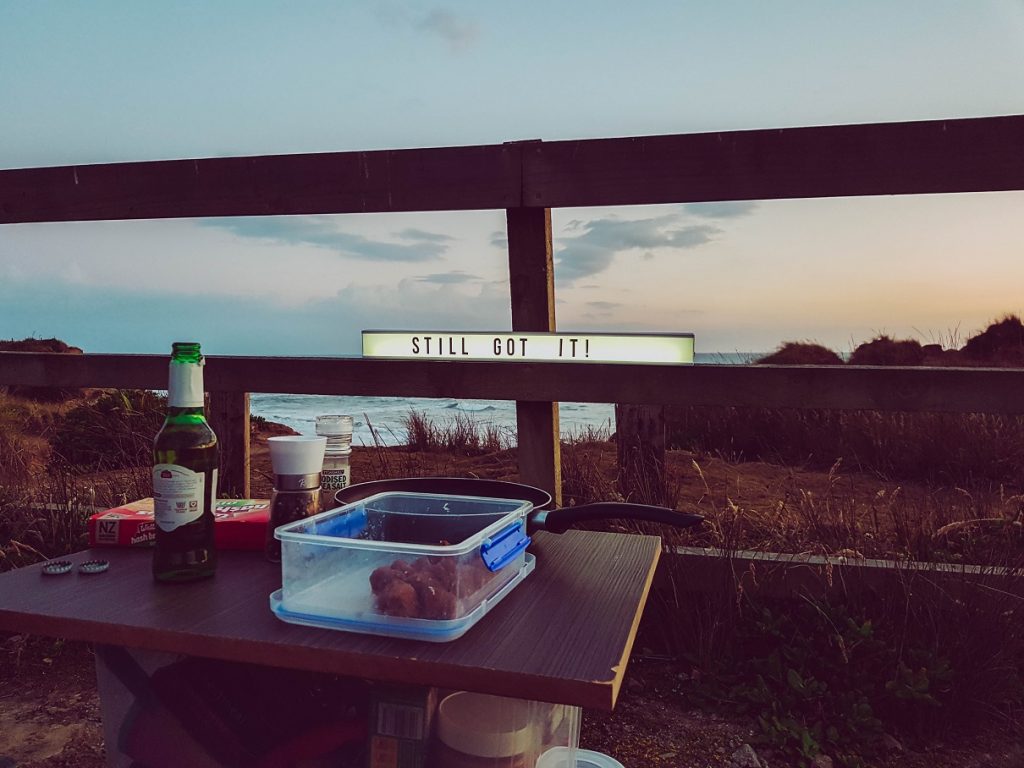 The hot, sunny and sandy Christmas

It is hard to describe the feeling this Christmas in New Zealand brought, but I guess those who have ever spent their Christmas away from families for the first time, should get me. So this was our first Christmas ever spent away from our families. It is a bittersweet feeling as I can’t be happier with the decision to travel and still can hardly grasp the happiness and excitement I feel being here each day, but, Christmas meaning for me has always been about family getting together no matter what and it pains not being there. 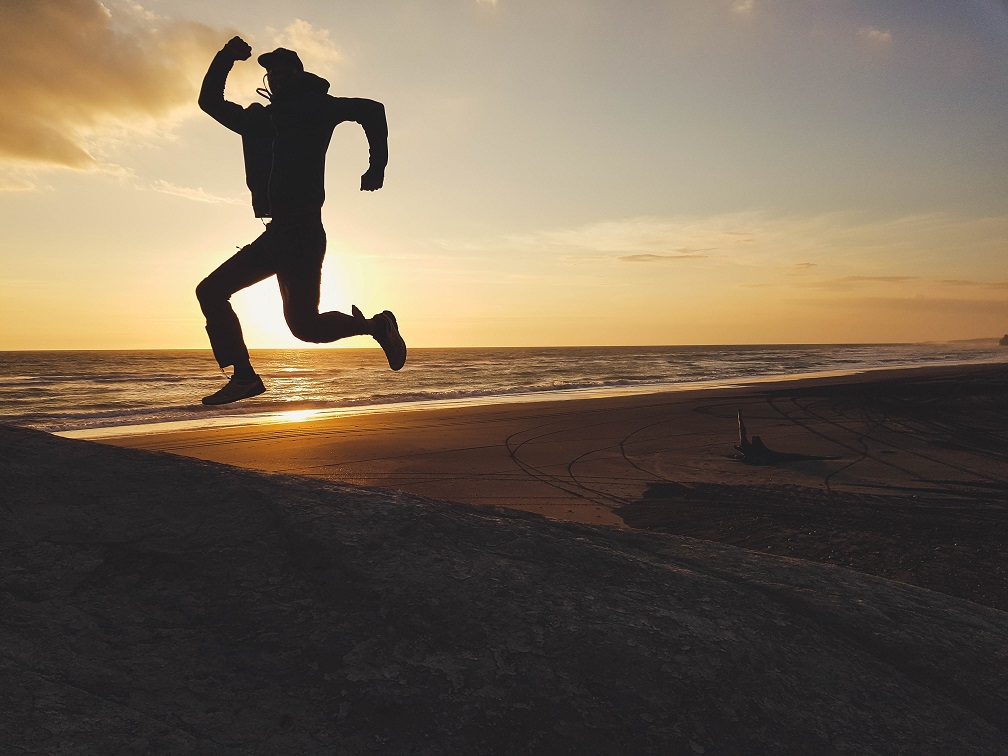 It was the first Christmas ever that I woke up without rushing to the Christmas tree (maybe simply because we didn’t have one in our little Gigi) as well as not feeling all the traditional things Christmas like. I guess it is hard to feel white, cold, snowy Christmas while celebrating it at the beachfront enjoying sunshine and +25 °C heat (not that I’m complaining). However, both of us were extremely excited to wake for the video call and at least digitally sit at our families’ dinner tables for Lithuanian Christmas Eve. If not for the bad cell reception and connectivity issues, it almost felt as being there at least for a moment. Well, at least until you realize you can’t really taste those delicious meals mom cooked (mmmmm, those mushroom pies I’ve dreamt about for a year – we call them “little ears” in Lithuanian, though I’m not sure what should be the correct translation). 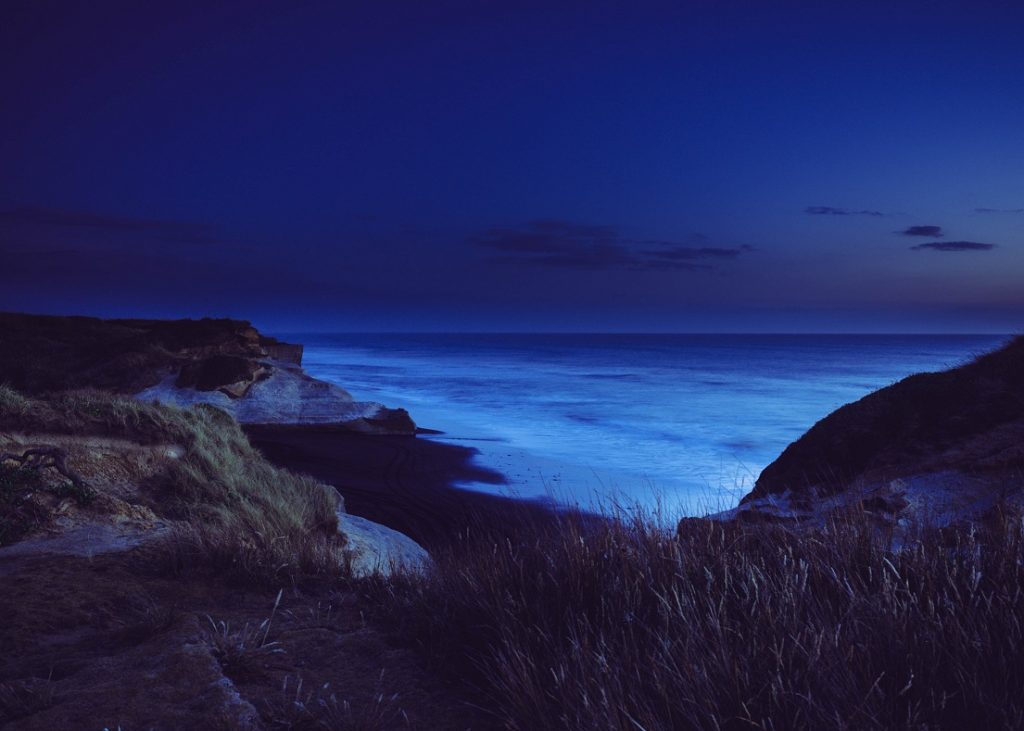 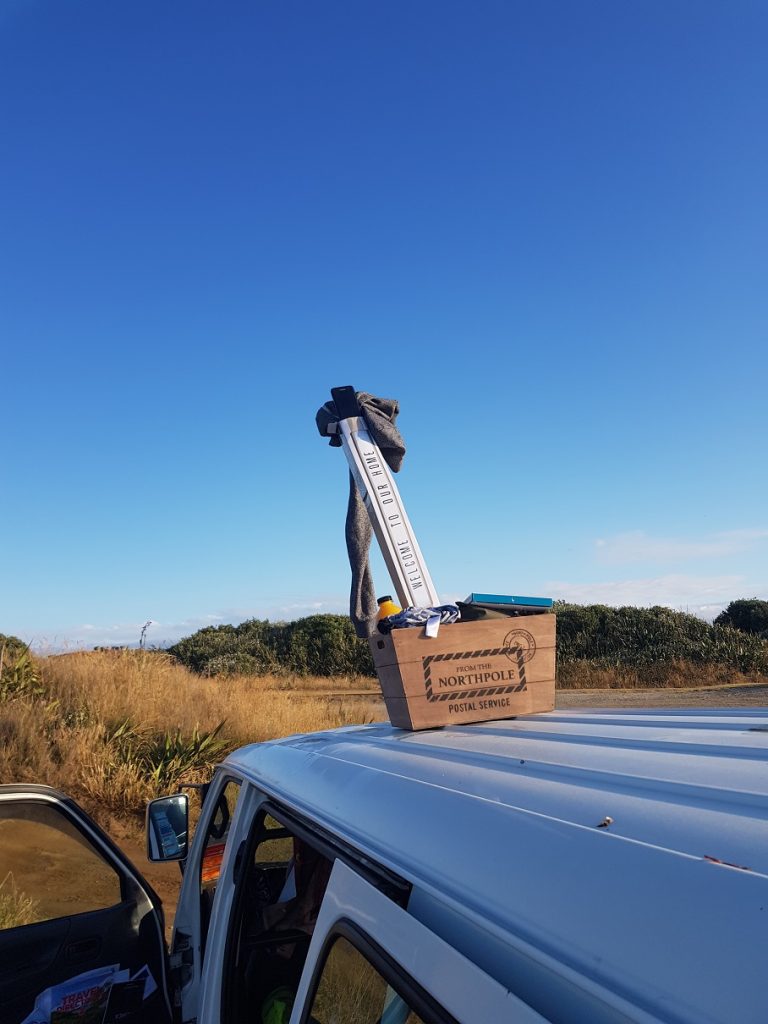 Algirdas constructed this antenna for my phone seeking a better connection

Anyways, after a morning spent talking to families and catching connection (constructing antenna and Al driving while I was catching better reception laying in the bed) time went past quite quickly and we have spent Christmas day with new inspiration for home improvements. Well okay, let’s be fair, it was Algirdas that spent the day on improving the kitchen/living room set up by adding additional storage and a drawer, which was exactly what I wanted for Christmas (yay!), while I pretty much spent the day just writing my journal with new inspiration.

We haven’t even noticed how the day went by and only around 9 PM, already with the dark we have decided to abandon the lovely beach and move one (just for another 1 hour to settle in another beach campsite). However, there were no freedom campsites on the way and when we arrived around 10 PM, the night being Christmas there, of course, was no one at the office and we decided to move on ahead just a bit more until the next campsite. 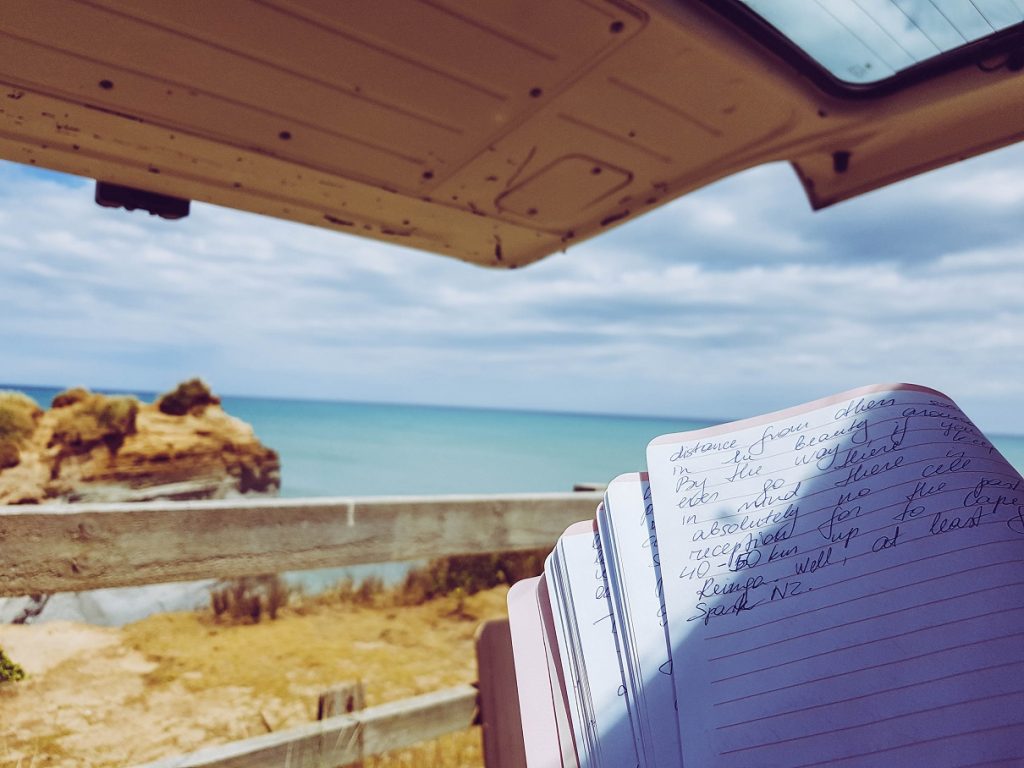 Still Got It notes!

Anyways, we ended up driving another 2 hours, arriving at the Otaki Forks DOC campsite through 10 km of gravel road of serpentines during the night time. Only the following day in the daylight we’ve learned how beautiful, steep and dangerous the road really was. Opotiki Forks is truly a beautiful campsite settled in the river gorge, but we decided not to stay any longer and continued our trip leading us to the windiest city in the world – Wellington, for that reason also known as the Windy Wellington.

More stories on holiday season come next from craft beer and coffee capital of New Zealand. 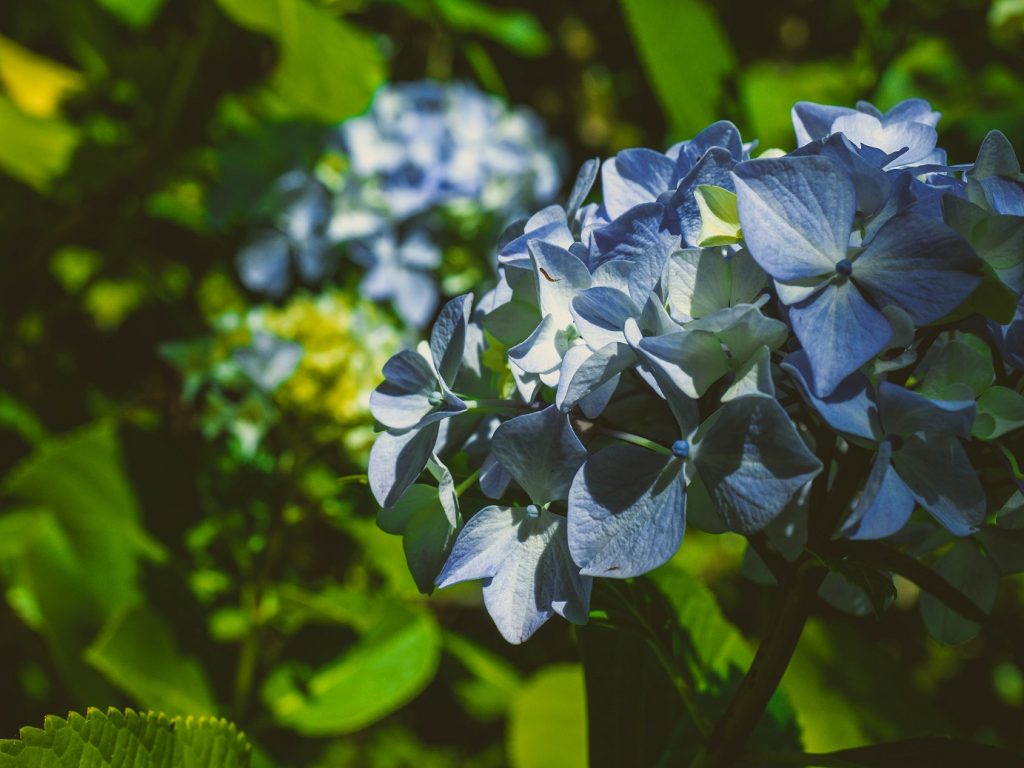