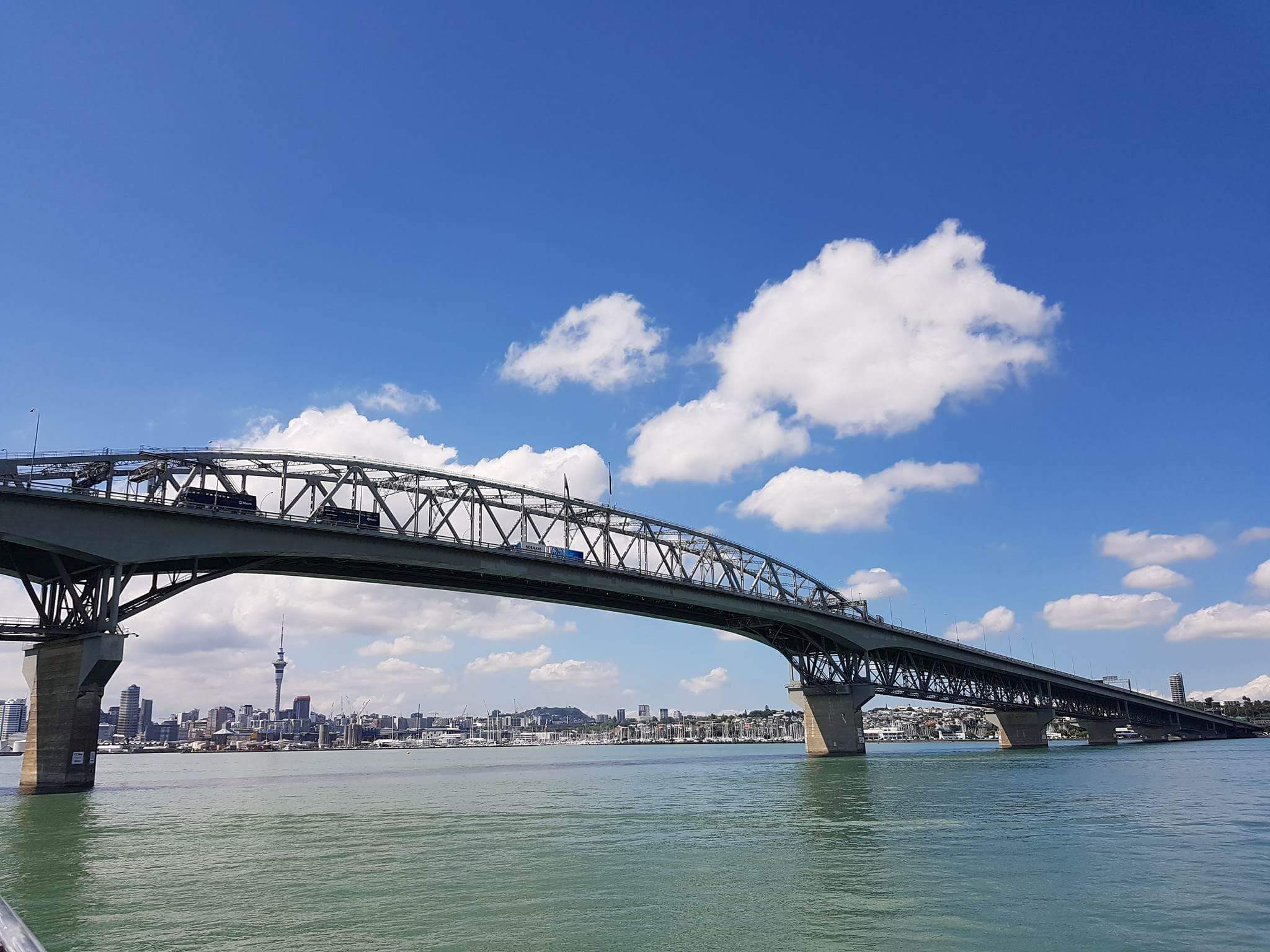 Before the Van (or what happened in Auckland)

We have started our adventure with a plan to stay a week in Auckland, during which we had to find a van, open our bank account and obtain IRD numbers. Since we managed to get the van on our first day not much was left for the rest of the week. Or was it? Well, what fun would it be if everything went as planned? But let’s not get ahead ourselves and start from the beginning. 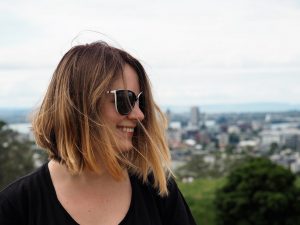 Super happy finally getting on top of Mt. Eden

The day after arrival we woke up pretty early (4 AM to be exact). Seems it took only 17 000 km for me finally to become an early bird (at least for a week or so). So this first day of our new life was rather surreal as we took our time wandering suburban streets, soaking in all the sunshine we could and just coming to a realization that this was it – we had no obligations, nowhere to be, nothing to do, no one to report to. What a wonderful, liberating feeling it is to just go for a walk in the middle of the day knowing there is no office you need to come back to or, quite frankly, knowing nothing what to expect and what is to come ahead. Don’t get me wrong, Algirdas and I, we both enjoyed our jobs but at some point we just got into routine and we simply needed a break from the 9 AM to 5 PM (actually, 6 PM) office life to enjoy everything we miss out when in the office. 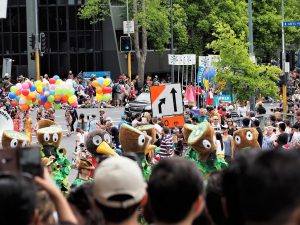 It is so easy to get into a routine, when you wake-up too late, miss the breakfast and rush to the office. Then you work until 6 PM, get back home around 7 PM and you are super tired to do anything. You have dinner, maybe watch an episode of Game of Thrones or any other of your favorite TV shows and go to bed. And then the same thing again, maybe you get to the city one evening to meet some friends, grab a drink and the next day in the office is really hard and unproductive just because you stayed out late. You tell yourself that from now on you will be going out only on weekends. 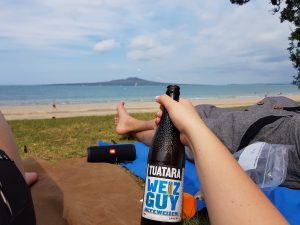 On Friday you party a little too much, so just spend Saturday in bed playing PS4 games until late and ordering food in  (I’m not saying we did not enjoy it, actually we did a lot and do miss the PS4 sometimes, which is really in good care of Povilas, hopefully having fun instead of gathering dust). Then on Sunday you finally go out somewhere for a walk in nature or around the city and Monday start new working week again. Well, not sure if you know the feeling but I hope you get my point? I feel there is just so many things we’ve been missing out on. And again, there’s nothing like the excitement of wandering yet undiscovered places (or topless tanning in a secluded black sand beach as I am while writing this). 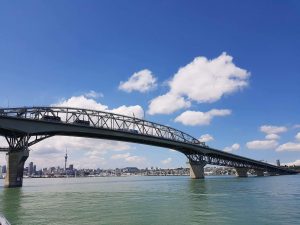 The bridge we crossed each day to get to CBD

Coming back to Auckland, the first day we took a ferry into the CBD, where ‘surprise, surprise’, we have discovered there’s a great variety of all kind of merchandise from food to clothes and especially hiking gear. This is if you remember how I said we went on a shopping spree on my previous post. And apparently things aren’t as expensive here as we expected (prices are slightly higher, especially in food department, but clothes, healthcare & hygiene products, as well as top-notch hiking gear, is not so expensive during Christmas sale, especially when you happen to come during Black Friday weekend (50% off + 10% discounts). First mistakes – buying hiking clothes in Lithuania. We came here is summer bringing all sorts of clothes prepared for the winter season. We could have quite easily avoided extra weight getting things here for a relatively similar price. However, we have no regrets neither with MSR Elixir 3 tent we got, nor with the sleeping mats and we’re especially happy about getting the most amazing hiking boots – Lowa Renegade (super comfy). Well, if anyone will be interested, I’ll try to make a separate post about our gear when it proves itself worthy. 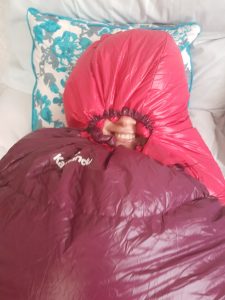 Anyways, well, of course, we got affected by the sales and since we did have a need we ended up coming back home with the most amazing Kathmandu Columbus sleeping bags (and few other things…). We also went to the bank trying to get the appointment but got our plan of opening an account within a week crushed, since apparently there was a waitlist for 3 weeks. Keeping it to the point, our first day was rather short and tired from all the excitement and shopping we went to bed early, early as 6 PM kind of early (I know, I know but cut us some slack, as you know – JETLAG).

Before I forget, let me tell you more about our amazing Airbnb grandma – Lepa. For the first week we have been staying at Lepa’s place. She is a lovely lady originally coming from Tonga, who’s been living most of her life in NZ. Last year she retired and started taking in Airbnb guests, though she has been hosting international students for many years already. Thanks to Lepa our first week in Auckland was incredible since we always felt as at grandma’s place. Each morning she would fix us buffet breakfast – nothing really special but still we would get toasts, peanut butter, jams, cereal, granola and vegemite (trust me when I say you don’t want to try it but if you’re feeling brave enough, be my guest and make sure to share your impressions in the comments). Anyways, as lovely as it sounds, it is easy to get bored by toast and jams, so soon enough we have started making our own traditional breakfast – scrambled eggs, bacon, avocado and orange juice. Thanks to this wonderful lady we had a dreamy beginning to ease into our new way of life. 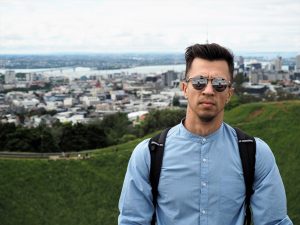 Serious Algirdas and Auckland’s panorama from top of Mt. Eden

As the week went by we continued to explore Auckland – from checking out craft beer venue and hipsterish coffee shops to strolling through numerous parks – climbing Mt. Eden, wandering in Auckland’s Domain, exploring Takapuna beach and many other places. Let’s not forget the Santa’s parade taking place on hot and sunny November 26th (a bit different from what we are used to when it comes to thinking all the things Christmas like). Little by little enjoying Auckland’s life the next week started. 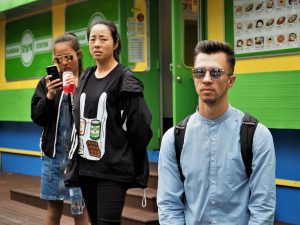 Unfortunately, it started with a bit of concerning news – our van won’t be ready until Friday due to some delays. Not too happy we had to start looking for a place to extend our Auckland’s stay for another two days. Don’t get me wrong, Auckland has been nothing but lovely but we came here to explore the beauty of the Middle Earth. Not to mention that Auckland had already cost us way much more than we wanted and booking last minute cheapest places were already gone. So the last night prior moving out of our lovely Northcote home we spent meeting some native fellows on a same Working Holidays adventure. 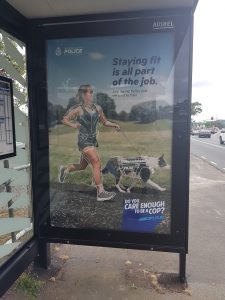 Wednesday morning, one week into our journey, we left Northcote behind and took this extra time as an opportunity to stay closer to CBD and check out The Classic – the only comedy dedicated bar in NZ. We moved into a hostel in Freemans Bay, which let’s just say made us appreciate our stay at Lepa’s even more. Despite the lack of coziness, it was rather centrally located which made it easy to explore hipsterish Ponsonby and legendary K road (can’t say I understand what’s so legendary about it, though you should probably explore it during a weekend night rather than Wednesday afternoon). 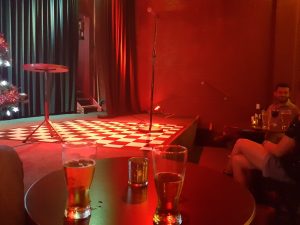 The Classic – the only comedy dedicated club in Auckland

Can’t say we did much during those few days but the visit to The Classic was definitely a highlight. We managed to get a table right at the front, so naturally were also targeted a bit (which by the way thought me that Algirdas thinks we’ve been together for 3 years only when in fact it has already been nearly 4, but who’s counting…). Besides that, nothing much happened as we’ve hit the moment when we became more cautious about our spending and decided to just calmly wait for Friday to pick up the van. 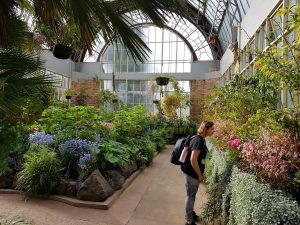 Surprise, surprise, Thursday evening we’ve learn our van would not be ready for Friday and we were once again looking for a place to spend another night. Lucky for us we did find another lovely Airbnb in Mt. Albert. Our host Annie was the sweetest and even helped us out to open a bank account by providing her utility bill and a handwritten letter stating we were staying with her. To our surprise, it was super easy to get an appointment at the bank even the same day when further from the CBD. So at least we have used this extra time sorting out our bank account and IRD numbers. Now we can proudly claim we are owners of a joint bank account at Kiwi bank. All employees were super lovely, so we can definitely recommend Kiwi bank. If you are looking to open an account, just go out of the CBD and you won’t have to wait for 3 weeks. 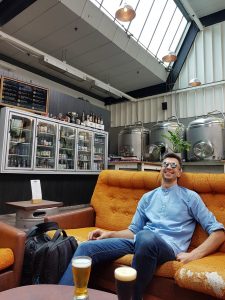 By the way, keep in mind that Airbnb payment confirmation alone is not acceptable as a proof of address (even though some people claimed it worked for them), you do need a letter from the host to confirm it and host’s proof of address. It is actually surprising how widely and how much the handwritten documents are used here and how much stronger of the proof they are treated (our van selling agreement was two handwritten copies that were signed). By the way, Kiwi bank is actually at the NZ Post. You can do pretty much everything at the post office from sending/receiving letters to banking, obtaining IRD number, transferring vehicle ownership, getting your driver’s license, etc. 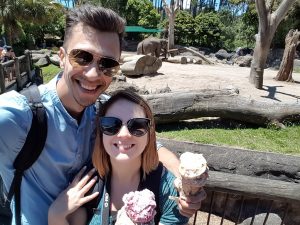 Anyways, on Saturday we’ve learned the van wasn’t ready and guessing that upfront we had extended stay at Annie’s until Sunday taking Saturday afternoon to explore the zoo. By the way, if you ever at the zoo and visit NZ section, I guess you’ll notice that NZ section pretty much has only birds. As there are only two native mammals in New Zealand – two types of bats. The rest is just the land of birds. You know, going to the zoo has this special effect on me bringing out the kid in me – super curious, super excited and ice cream is a must. Here, by the way, is where I have discovered my new addiction – Tip Top scoop ice cream (my favorite flavor is boysenberry and Algirdas is crazy for cookies and cream). After all, everything is always better with ice cream, isn’t it? Even when things don’t go as planned, ice cream will fix it. 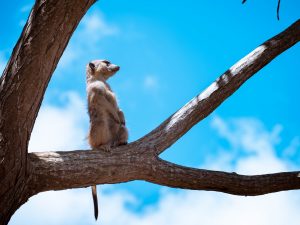 Meerkat chilling in a tree.

The Van and Other Preparations (a.k.a. Vanlife Begins)